Bendy and the Ink Machine - Chapter 1

When you receive a note from an old friend Joey from decades past asking you to help investigate something, you naturally agree to come stop by. Even if that something is in a house possessed with a feeling of melancholy. And spooky objects scattered throughout the compound, along with a creepy picture of some sort of doll, haunt you. Not to mention, the aforementioned friend is nowhere to be seen at the moment. No, none of those are red flags, because you are a good longtime friend, and you are here to investigate this wonder.

As you pace around the wooden structure, there are lingering hints that things are not quite right. The game is played in first person, compounding the experience as you explore and interact with the surroundings. The adventure is nicely complimented with voice acting, from the utterances of your character trying to find their way to ghostly recordings from ages past.

Despite the lack of any evidence of life and the hints of activity seeping into the paranormal, you continue to wander around, collecting objects and dutifully attempting to make repairs to the ink machine. Tucked away in a corner you find the unfortunate fate of your friend, Joey. You continue undeterred, traipsing across the wooden floors as if somehow entranced, needing to find out more about the mysteries of the ink and animations from what feels like a bygone era. 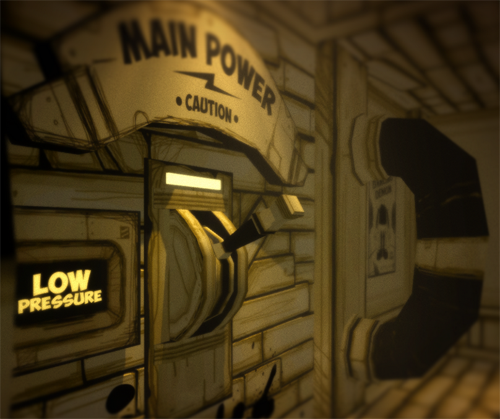 Arrow keys or [WASD] and mouse movement are used to navigate this game, which is again set in first person. Holding [Shift] enables faster movement (running), but skews the background oddly making objects appear further away than they are. Subtitles can be enabled in settings to help you cling on to every word, or switched off if you prefer to leave them out for an even more immersive experience. Popups in the corner intended to highlight your objective somewhat break the flow, and I think the game would have been better served integrating them into voiced comments instead ("Hmm, I should have a look around for the ink machine.") Despite these couple qualms and the short length, Bendy and the Ink Machine - Chapter 1 successfully creates the aura of a horror game by combining several facets - the graphical design (which is solid even on my high definition laptop screen), the voice acting, and the high-quality lighting and sounds to name a few. And as usual, the best surprises are saved for the most sudden of moments. According to the game menu, future chapters seem to be planned, Chapter 2 of which is currently released on Steam and several other platforms for sale.

Warning: This game contains flashing lights and fast images. If you have epilepsy or a similar condition, use caution before playing the game.