Ben There, Dan That! 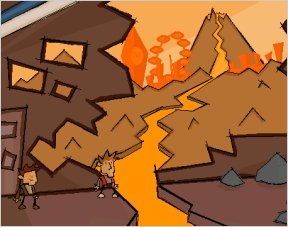 Ben There, Dan That! is another of those old-school adventure games that explodes the "fourth wall", like the recently-reviewed Inquisitive Dave. Also like Dave, Ben There, Dan That! features adorably naive retro artwork (Ben & Dan lean more to the tiki cocktail end of the retro spectrum, which I am sure you will enjoy despite the fact that they are clearly Real Ale drinkers). Unlike Dave, Ben & Dan features some fairly witty writing with that rather unique British self-deprecating sense of humour. 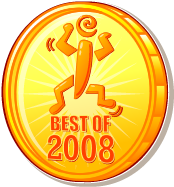 Having reanimated Dan after an unfortunate spell of zombification, you boys will no doubt want to kick back with a relaxing spot of quality television. Unfortunately, your TV has no aerial and you're about to miss Magnum, P.I. Being the innovative sort that you are, you quickly whip up a makeshift aerial and pop it out of your apartment window, thus enabling aliens to kidnap you and whisk you away to an alternate dimension.

Ben There, Dan That! is an adventure game. You know how this works. Right click to access the interactive menu. Interact with objects. Pick them up. Use them with other objects. In this game, you default to playing as Ben, but you can switch to being Dan when the occasion calls for it. Which isn't very often.

Analysis It's rare for me to giggle all the way through a game, but BTDT whacked my funnybone hard. Make sure you interact with everything — using the eyeball and the speech bubble on improbable objects reveals hidden genius. It does help if you are a bit juvenile — this game is not labeled kidsafe for a very good reason, as you'll see when you try using Dan on himself.

The puzzles are pretty good — even though they're a bit MacGyver, they make a bizarre kind of sense in the game context. For relatively inexperienced (or in my case, incompetent) adventure gamers, the puzzles should be satisfying without being too frustrating, whereas experienced adventure gamers would get more out of the gaming culture references and the premise of the game (I don't want to give too much away here). There is a complete walkthrough on the web, but if you don't want to ruin it, Ben and Dan helpfully provide a hint-through which is almost as entertaining as the game itself.

Note: This game contains both language and situations that aren't appropriate for kids. And if an extraordinarily crude sense of humor isn't your thing, you might want to pass on this game.

Mac OS X:
Not available. Use Boot Camp or Parallels.

I enjoyed the humor in this game. It ranged from passable to extremely funny. However, the gameplay itself wasn't really that great. Some puzzles were too obtuse, and others were just the standard moving inventory items around. I know it was supposed to be a bit of a sendup of the classics, but the puzzle design was just too derivative to be enjoyable for me. I wasn't really compelled to finish it, so maybe it picks up in the second half.

I didn't think the puzzles were too hard compared to other games I've played like this. Most of the solutions made some kind of sense. And there were a lot of clues in the dialogue for what to do next. I just finished the game and I really like the effort the designer put into adding descriptions for just about everything. An A+ adventure game.

This game rocks all things. Hilarious to the max, riddled with cleverness. I totally had some moments of nostalgia here.

Donated 10 (uh'merican dollars). You really should do the same. So much work put into this!

This game is such fun! I am so impressed with the amount of work that went into the writing. Every clickable thing had unique dialogue, and you never see that any more. Even the shadows had something unique!

I'm still not finished playing...I'm spending too much time using all the actions on every hot spot. They're too good to miss.

My favorite - "How appropriate, you fight like a cow." So random and reminiscent.

Hours well spent. I wish I could buy the creators a beer...but all I have to offer is the watered-down American kind. ;)

Ha Ha, like I fell for the game I did! The catch was that I can't download it 'cause it's inapropriate. :(

I can't do a thing with it because I run a Mac. Can some of you share some of your favorite "hilarious optional dialogue"?

(Someone's taped cardboard over the window for some reason...)

Ah, loved the references in this one, and the lowered degree of censorship. Made my sick day, for sure.

SonicLover and other Mac users:

This is an AGS game, and there is a beta version of AGS for MacOSX available:

I haven't tried it with this particular game, and the games I did try it with were somewhat hit and miss. Some games ran great, others had serious problems. Anyway, it's worth trying :) Be sure to report back if you try it out.

(You launch the game by dragging and dropping the EXE file onto the app).

anyone know how to get the moonshine booze from the three evil bums by the boarded up fish shack?

To get moonshine from the bums:

They're video game enthusiasts, right? Get some games in their hands and they will be willing to part with the moonshine.

Hi I've just started the game. And now I'm stuck on the Graveyard Scene bit. I've tried everything. Will someone please help me how to get out of it? What in are you suppose to do with the candle so you can talk to the priest that's suppose to be there? Would be much appreciated. Thanks.

Carefully examine all the roman numerals on the columns, then read the passages in the Bible - they will tell you what you need to do with the six candles.

Hi! I'm stuck trying to thaw out the guard. Does anyone have any hints? Yes, I read the hint-through. Maybe I'm just obtuse tonight. Help?

:( I can't download it, it keeps saying theres an error with the cab driver? Something wrong with the CD rom I'm downloading it from?

OK, I may be missing something obvious, since no one else has asked, but:

How do you get the action figure from Gilbert?

throw him the glue!

I tried gluing every other object - I never thought of throwing the glue-pot!

For those who can't install it, it's because you're not connected to the internet.

Can anyone help me? I'm trying to download the game and it says theres an error. What should I do? =(

Glad you're enjoying the game!

Although if you're having problems running it from a disk (presumably the PCZone coverdisk?), you may want to download it direct from our site: zombie-cow.com/btdt

Mac-wise, I've also heard that it runs well on Parallels.

and should solve most problems. If not, feel free to join our forums and post on the hints and tips thread, then stay for the fun!

It is funny, the gameplay wasn't linearic, but it took me 1 hour to realise that I have an inventory in upper corner.
I'm stuck at the church at the parallel dimension.
I read the stuff on the wall.
I know that the thing in the Bible means the order of lighting up candles.
I just don't know what's the order.

What a fun way to finish an evening! I chuckled along, especially at the end. The only moments that were too crude for me were in the museum, so overall, quirky, absurd British humour. Love it!

what metal-cutting object do i use to cut the lamp post?

Please, how do I get a condom to wrap the loo cakes in? I got the money out of the condom machine but can't seem to get a condom. Tried putting the money back in the machine - nope!

I think the metal cutting object is supposed to be a can opener, but i dont know where to get it... any ideas?

In the world where Britan joined America, a newspaper blows into your face. Use it to wrap up the loo cakes. And the metal cutting object is in the museum in the "cow" world....I'm just now trying to find out how to get it. :)

I think this is maybe no longer free, although it can be purchased at
http://www.sizefivegames.com

[Thanks, I've fixed the links in the review. -Jay]