The Princess has been kidnapped! Fight the demons to win her back! Unless, you'd rather be undead... in which case, fight to keep the humans at bay and escape with their Princess! It's your choice in Battle of Heroes, an action strategy game by Gotta Game with a zany two-sided story. Gather gold to buy your army and send them down the screen to crush the enemy's camp. Unlock heroes to gain benefits for specific units and use their heroic spells to give you that extra 'umph' you need to win the round. While you have useful spells, so does the enemy, and they put them to good use too! You'll soon find the AIs are a clever bunch, even outside the witty and humorous banter in the cut scenes. Each campaign has fifteen levels to play through to see what happens and while both start with the same tale it quickly changes depending on whose side you're playing for. 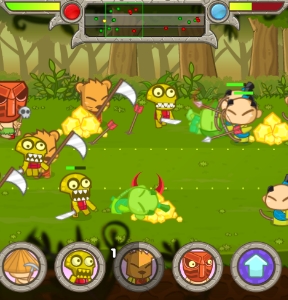 Even without the magnificent storyline, the game play itself is involving, making you quick on your clicks. You only have three lanes to manage, but when the times get tough, which they do rapidly after a few easy levels that get you into a sense of false ease, three lanes are plenty to watch over. If you're not the one reducing their building to rubble then it's your base that's falling, which means most levels are over quickly. Not all levels are a tug of war for control of the screen, as some levels have different goals or a new twist thrown in just as you thought the game was starting to be too monotonous. Make sure to make use of your hotkeys to avoid frustration, as it is very easy to mix up which lane is actually active, causing you to send men down an already fortified lane, and leaving your struggling one vacant. Minor issue aside, Battle of Heroes is a grand tale with two sides that will keep your mouse clicking fast and a grin on your face.

I quit at the ninja map. It ramps up to stupid levels of difficult with enemy spam, a cheap free attack at the start that WILL kill your miners and too much fog of war. NO THANKS.

Turns out, this game is pretty badly programmed. You can cheese your way through the ninja level by just NOT putting down any units and your money and mana continue to go up. Just do that until you can afford all magic upgrades and nuke the hell out of 'em.