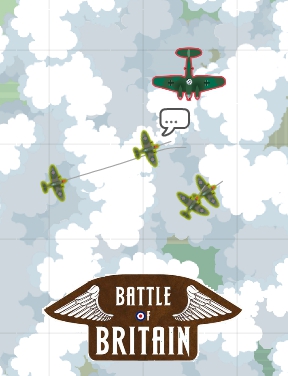 Wikipedia tells us that the Battle of Britain was a World War II bombing campaign waged by the German Air Force against the United Kingdom in mid-1940. It was the first military campaign fought nearly entirely by forces of the air, and those British that fought and prevailed inspired the famous Winston Churchill quote that "Never... was so much owed by so many to so few." And who were these few to which we owe said victory? Well, according to Black Moon Design's new real time strategy release, appropriately titled Battle of Britain, they were a quartet of quipping, heavily-accented, impressively-mustachioed flying aces, who were able to fly in such elaborate patterns thanks to the orange curvy lines drawn out ahead of time across the English countryside... Okay, perhaps a bit of history is lost in the adaptation, but it's fun.

You command a team of four spit-fires tasked with protecting ten factories vital to the allied war effort. You must use your planes to destroy all enemy bombs and fighter planes before they cross your green-striped safe zone. Should they do so, you lose one of your factories. Lose them all, or have all your planes shot down and the game is over. Your spitfires are controlled by using the mouse to draw out flight paths. To plan a flight, click on the plane you wish to control, then drag your mouse in the path you wish the plane to take, releasing the mouse button to finish the path. If you hold the [shift] key while selecting more than one plane, you can draw a path for them to follow in formation. They will fire upon enemy planes automatically when they are in range, and you can heal by flying your ship into the safe zone. Now get out there and fly through adversity to the stars!

Analysis: There is a lot I like in Battle of Britain, and some things I don't. Let's start with the good: The mouse-driven plane steering mechanic is as unique to flash games (outside of the iOS game flight control) as it is awesome. It makes controlling multiple planes easier than I've ever seen in a flash game, and instantly reworking trajectories while in motion is a breeze. Certainly I hit the pause button when I thought a defter strategic touch was needed, but that it was a rare occurrence tells me that the game has the right pace Those who usually find strategy games too technical for their liking should enjoy the ease with which Battle of Britain presents itself. What's more, I have to give mad props to the graphic design: if there was a way to animate a propaganda poster, this is it. 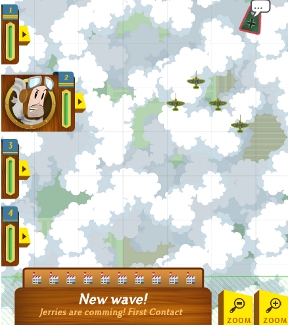 On the negative side, both the gameplay and writing could do with quite a bit of polish. It's very much steer-your-planes, shoot-their-planes, heal-your-planes, wait-for-a-new-wave-of-their planes, repeat ad nauseam. Those looking for a climax won't find it here. Likewise, while the voice-acting is excellent, there seems to be be a quite small pool of lines from which the game draws. Quips that were funny the first time get old round about time number seven. Also, the translation needs a spell-check. Whenever I see a "loose" when it should be a "lose", I get the same twinge that I get when I accidentally chomp down on a fork.

The main thing that makes me leery of Battle of Britain is inherent to its premise: It presents itself as a light-hearted, slightly-jingoistic recreation of a siege that was, in many ways, nothing short of horrifying. For this kind of thing to work, the humor has to be excellent, and here it was hit and miss. Don't get me wrong, It's not that I find joking about The Blitz particularly offensive: I think I gave up the right to take offense at gaming's depiction of World War II after I gleefully exploded Robo-Hitler on three separate occasions. Still, I guess I expect a little more gravitas to the proceedings when the setting is a real battle once fought by real soldiers. Perhaps I wouldn't be left so cold if the battle the game depicted was fictional. Perhaps I'm unfairly comparing it to the excellent prose of the similarly set Steambirds: Survival. I don't know. To most, the tone won't matter at all, but it does to me.

Of course, it also matters to me that the British pilots in the game yell "Your mother was a hamaster" (sic) which, even when spelled correctly, is canonically a French insult. So take what I find to be important with a grain of salt.

For those not fans of RTS, Battle of Britain might serve better as a toy than a game: the path-drawing mechanic is certainly novel enough to enjoy for at least a couple of waves. I think even dogfighting fans would want more depth after a while. That said, even if it needs to be more focused in its utilization, Battle of Britain has innovation to spare. Anyone looking for something new will find something to like.

"Whenever I see a "loose" when it should be a "lose", I get the same twinge that I get when I accidentally chomp down on a fork."

While I heartily agree and sympathize, I can't help finding it a little ironic that this statement comes in the same paragraph as the phrase "ad nauseum".

Isn't there a law of the internet saying that it is impossible to make fun of a typo without making a typo yourself? :)

I couldn't disagree with you more about the control scheme. Alternately tedious or deliberately frustrating, depending on your preference for real-time use or pausing. No. Thanks.

Whatever happened to that lovely old English word "hamaster"?