Welcome to the winter wonderland, where trees look lovely, snowmen abound, and your enemies are much easier to spot and shoot dead. Battalion Commander 2 by Iriy Soft shows that snow makes everything more better, including action-packed vertical shooters, as your men march out to frolic on the white battlefield. Their goal is to complete missions and maybe, somewhere along the way, actually reach the enemy headquarters. They will walk and shoot on their own; all you need to do is direct them (with your mouse or [WASD] keys) and use the special skills by clicking or pressing the [spacebar]. 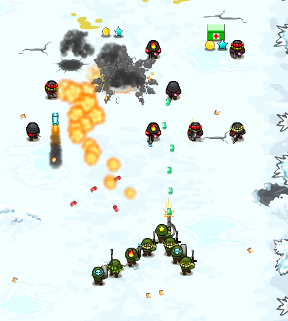 As in the original game, you start out with the leader and pick up team mates as you go along. Each time you start, there will be three missions to complete, and they will give you money and experience points which you'll use to reach better ranks and purchase upgrades. There are forty-eight missions in total, which makes this game shorter than its predecessor, but it's still more than enough to keep you entertained for a good while. Battalion Commander 2 introduces perks, such as reduced damage or better movement speed, which are unlocked gradually. There are some new soldiers, weapons and skills (bullet time ftw!), all making the overall experience even greater. Your enemies are more sneaky and better equipped: they will jump out at you left, right and centre, and their sinister towers will rain bullets at you like there's no tomorrow. The mechanics are as smooth as ever, and the soldiers as tiny and awesome, bravely wading through wave after wave of artillery. So, whether you want to reach the end of the road or you're just in it for the glory of completing missions, Battalion Commander 2 will give you an excellent fix of polished, fast-paced action.

Ever since Armor Games instituted MANDATORY UNSKIPABLE advertisements with GoogleAds using YouTube, my YouTube-blocked work computer has been unable to play anything at that site.

I have no idea where the last hour and a half went...

A decent sequel... but it's annoying that right after I bought the upgrade to start with a Rifleman I got saddled with a challenge to run 250 meters as a single Commander.

I agree with tenzhi, I had the same issue. If there is EVER a case in your game where an upgrade can be a disadvantage, it needs to be toggleable. You should not be punished for advancing.

This still suffers from my main gripe of the last one. Namely, the more guys you have, the more screen space you are taking up, and hence the harder it is to dodge things. You basically have to rely on brute force to kill things first, rather than finesse. This makes it less engaging than most vertical shooters.

First, it is ridiculous to not get credit for an achievement that you have completed earlier, but wasn't one of the three currently highlighted. What is so wrong with having a page of goals and ticking them off as you achieve them? Is this just to make the game drag out longer?

Second, if it can take over a minute to intentionally kill yourself, it isn't really a game.

@Hippasus, re: your second complaint: just walk into a tank/bunker/structure/etc. Instant death.

Alternatively: just abort the mission. Amounts to the same thing.

Ok, a final post: it seems I was a bit too hasty with my praise. The achievement Tenzhi is referring to, although possibly annoying, was no problem for me since I didn't have the upgrade yet. If I had, I think it should be possible to get the achievement by getting the rifleman killed.
Hippasus' suggestion number #1 would make earning achievements way too easy, so the current system is alright by me.

Towards the end, however, achievements get buggy:
1) I earned 'ride 1000 meters in the APC' at the first attempt, which I believe got just past halfway of that.
2) I walked 1000 meters without using my skills and the achievement turned green. I used the air support 2 seconds later, and it got reset.
3) When riding the APC, distance-based achievements don't count the distance properly anymore.
4) Besides the one achievement relating to Endless Mode, I now only have 'take out the boss without allies' left. I gave this one attempt, which failed. This could be because:
a) I have all the upgrades, so I start with four allies. Do I need to kill them?
b) When arriving at the boss screen, it contained a cage with an ally in it.
c) Another cage spawned IN THE MIDDLE OF THE BOSS FIGHT.

Not trying that again, if I want a game to screw me over, I'll reach for DoomRL instead.

Final conclusion: better than the first game in many respects, but still not worth the 5 shrooms I awarded it earlier.