If ever a game made you want to stand up and cheer as much as it makes you ache a little at the same time, Michael Molinari of Studio Bean's BasketBelle definitely fits the bill. Blending puzzles with accessible sportsplay and a strong emotional heart beating at the core of its surreal tale, BasketBelle uses sports and striking dreamlike gameplay to tell the story of a family and the things that bring them together. More than a simple strange basketball puzzle game, however, BasketBelle is a game about the things we're willing to do for the people we love, and why. 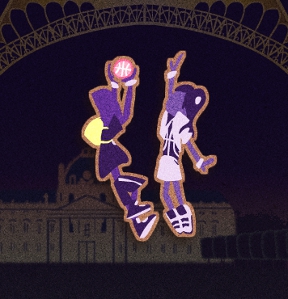 Use the left and right [arrow] keys to move, and hold the down [arrow] while running in any direction to execute a slick slide to carry you under obstacles. Tapping the up [arrow] will cause you to fake going up for a jump shot, which can come in handy if you have an opponent intent on blocking you from the real thing. To actually let the ball fly, hold [X] to jump, and release it in midair to hurl the ball in the direction you're facing. If the ball hits an obstacle during certain stages, it'll vanish and you'll need to grab another to try again, but since basketballs can also be used to push the yellow walls if thrown against them, you might need to break a few basketballs to make an omelette. Or, uh. Something. The objectives for each area can change, from one on one basketball to puzzle platforming, but sinking baskets is usually the key to victory. Don't worry... it isn't really as complicated as you might think, and chances are you'll be slinging like a pro even if your only prior dunking experiences were with donuts. 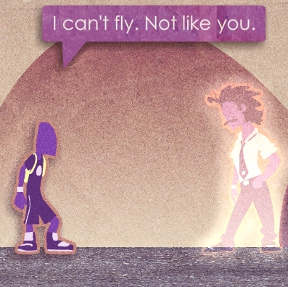 Analysis: Sports can be very important to some people, and if you're not into it yourself, you never really understand why. It's easy to get distracted by the surface aspects of it and not realise what a very real emotional connection it can make with someone, and BasketBelle manages to communicate this better than anyone else. Since Michael Molinari is already known for the sort of work that gives you what scientists call the feels, this probably comes as no surprise, but the focus on family love and dynamics instead of the typical romantic ones is unexpected... and honestly a little welcome since it touches home in an entirely different way. The striking visual style and swanky soundtrack infuses everything from gameplay from the cutscenes with an otherworldly vibe, but the delicate handling of the narrative is where BaskeBelle really shines. The cast and the world around them are full of emotion and personality, and the abstract design works exceptionally well.

BasketBelle is mostly very responsive and easy to get the hang of, though when called upon to do any sort of platforming within a time constraint you can wind up frustrated with how awkward the jumping can sometimes be. You might also wish the game had some sort of level select, since you can only pick and choose from the start of each chapter and not the individual stages they contain. It's an odd mix of genres that requires a bit of experimentation to master, but I'd be lying if I didn't say something about sinking a tricky shot wasn't immensely satisfying. BasketBelle is strange, surreal, and at times a little frustrating, but the unique style and gameplay combined with the story that feels straight out of a less gothic Neil Gaiman novel will make this one a real winner for the players it speaks to, and well worth checking out.

BasketBelle is fun to play, aesthetic in its visuals and foot-tapping original music scores. I highly recommend all to try it out...You'll be amazed!

I would love to win this , my most inspirational game moment was probably the first time I played Mario 64. Is this comment in the right place? XD

I would love to win this game! My favorite video game moment would be when I was little and I finished Zelda Ocarina of Time. It took my ages to finish but when I did I was the happiest person alive.