What happens when you combine the logical deduction puzzles of Mastermind, the word-searching challenge of Boggle, and a handful of military monkeys ready to do battle? Everything goes bananas! Thank you, I'm here all night, tip your server, etc. Banana Breakers by Simian Logic is a quick twist on a logic/word hybrid puzzle where you've got to solve not just one word, but up to six words at once! 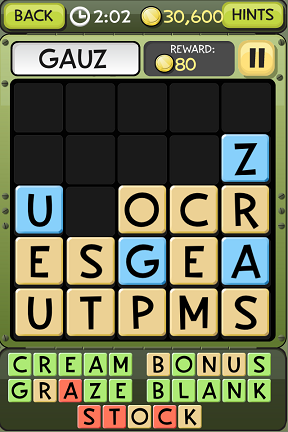 The grid of letters can be divided into a number of words (for example, the easy level has you finding four 4-letter words). Click or tap the letters to select them; they don't have to be touching, any letters in the grid are allowed. If you don't spell one of the target words picked by the computer, you're given clues to the position of the letters in one of the target words. A letter highlighted in green means it's a correct letter in the right position, and a letter in red means it's a correct letter but in a wrong position. Use these clues to help formulate your next guess.

However, unlike other word-Mastermind games like Wordspector, you're not just focusing on one word at a time, you're taking on all four (in easy mode) at once! The clues revealed to you always pertain to the hidden word that most closely matches your guess. You might use the clues from one word to formulate another guess, only to find it gives you new clues to a completely different word! Words that give you less new information than what is already shown won't give you any clues at all, but you'll still be credited for making a valid word with some coins.

For each hidden word you discover (or at least try), you'll earn some coins when you complete the board. Coins can be used to purchase clues such as a crossword-style definition of one of the hidden words, or outright spoil a word if you're stuck. Each board is a self-contained game, so you can quickly blaze through a few easy levels, or take your time with the medium (five 5-letter words) and hard (six 6-letter words) levels. Can you crack the code and deduce all the words before going bananas?

You might mention that, at least on Android, it requires you to install Adobe Air. It's not a big file, but some of these cheapo Androids have seriously limited space. It triples the size of the download.

That being said, this is fun!

This is a fantastic melding of 2 of my favorite games! This one earns a place on my homepage.

Really great game, but my one complaint would be that it uses American spelling, which for the most part is no problem but had me completely stumped on

'DIALOG' as opposed to 'DIALOGUE'

Sadly it checks for a specific version of flash player which is no longer current :( I lost Monster Mahjong the same way, back in the day. Standalone legacy players might do the trick though.