Remember Titus? Sure you do, he's that dummy who got himself trapped in a magic book his malevolent uncle left lying around. Then he called on you to help free a library from an evil genie who was ruining the classic stories contained within. It's been a few years, but Titus is back in the latest (and greatest) installment of the Azada series of adventure/hidden object hybrids, Azada: In Libro. That darned evil uncle is trying to take over the magical land of Azada once again, and this time it's personal! 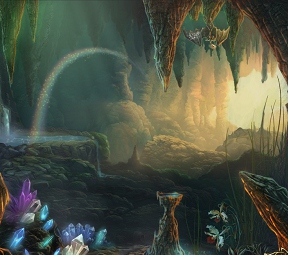 While the original Azada was basically a ton of puzzles strung together with a bare-bones story, and Azada: Ancient Magic played like a series of small self-contained room escapes taking place within classic tales, Azada: In Libro is a fully realized point-and-click adventure within the land of Azada itself. Titus' evil uncle is once again attempting to take over Azada, attacking the three guardians of the land who hold the three keys which are, well, the key to getting in. What said uncle doesn't seem to realize is the fact that if Azada falls, so does the real world. Or, maybe he does know and just doesn't care in his bid for power. Titus has called upon you to enter the realm of Azada and rescue the three guardians before his uncle can get his grubby mitts on them. 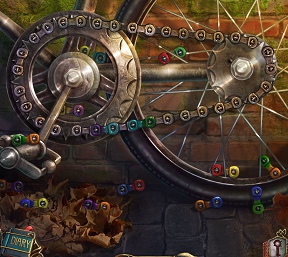 Azada: In Libro plays like a true adventure hybrid with a changing cursor, navigation arrows, a clue notebook, and the works. A bottom-loading inventory keeps track of the multiple items you will pick up along the way, most of them needed to activate the multitude of mini-games and puzzles hidden within the scenery. With few hidden object scenes and no lists, Azada: In Libro plays more like a classic point-and-click adventure than a hybrid. There are three modes of play included: Casual, which includes the usual refilling hint-timer, sparkles to indicate areas of interest, and the occasional text hint when an item is clicked on; Advanced, which keeps the refilling timer (it just refills slower) and the text hints, but loses the sparkles; and Hard, which has neither sparkles nor text hints, and the refilling timer is extremely slow to reactivate.

Analysis: It's been a long, long time (nearly 4 years) since Azada last enchanted us with its beautiful graphics and wicked puzzle-solving, and the time was very well spent indeed. Azada: In Libro has made the leap to full adventure story and wandering around the enchanted worlds of Azada is definitely time well spent. Lots of effort has gone into ramping up the gameplay, especially the adventure portion of the game. 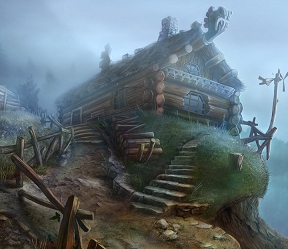 Most of the focus in Azada: In Libro is still on the puzzle solving, with puzzles and mini-games popping up everywhere you turn. In addition to the usual suspects of jigsaws, sliders, and the like effort has been made to create original and challenging games as well. Everything, games, puzzles, the occasional hidden object elements, are wrapped up in the gorgeous graphics which change in tone as you move further and further into the fantasy world of Azada. The lovely music is the perfect accompaniment as you rush to keep Titus' uncle from destroying everything in his evil quest.

Although not as long as it could be, Azada: In Libro is still a pretty hefty adventure quest incorporating a lot of amusing brain-teasers along the way. The only thing missing is, perhaps, the wonder of wandering through so many different fantasy worlds as in Azada: Ancient Magic. Here you are confined to only three, which is tiny let-down after the vast variety available in Ancient Magic. This is a minor quibble, however, as the locations in Azada: In Libro are stunning in their own right. And despite being marketed as a hybrid, there are very few hidden object elements to be found in the three worlds, which might be disappointing those who really enjoy that sort of thing.

Try the rest of the Azada series:

For anyone who enjoys adventuring, though, Azada: In Libro is definitely a must have game. The three modes of play guarantee a gaming experience which can be enjoyed by a wide variety of skill levels, and the beauty and wonder of Azada itself is definitely worth the visit. Get ready to help Titus and defeat that evil uncle once again!

3. In front of the Guardian's house

20. House of the Garden Gnome/Town Square

Anyone try this? I like these games at their top (weird park, drawn, dreamland, time mysteries), but there's a lot of bad ones out there.

Yeah I get it, but I'm well aware that you have close ties to Big Fish Games and at ~$20 for complete games, I'm looking for the best, so feedback from a person who personally paid for it has a little more weight.

Either way I really do appreciate the time it takes to find the best of the best for the rest of your reviews.

Wasn't the next Azada game supposed to be called Azada Adventures or something along those lines? Not that I'm complaing, In Libro is a better name.

I love that I get this game for free with game credits. I haven't purchased a game from Big Fish in over a year! I probably should feel guilty...

There are a lot of games on Big Fish that are (in my opinion) awful and most don't even get a mention on JIG. If you're looking for the best at $20 you'll get a shock at the price of a lot of games out there. The opinion of a person who paid for a game in no way holds more weight than a review on this site. They (especially Grinnyp) know what they're talking about here which is what makes this site a respected authority on all things games. Hence why Jay IS games.

They aren't a troop of fat cats in pinstripe suits lighting cigars with hundred dollar bills, laughing at how they're encouraging innocent people to blindly spend up to $20 on light entertainment, all the while swirling the brandy in their highballs.

For the record, we don't receive review copies of Collector's Editions. Whenever you see someone who has reviewed one, it's because they paid for it themselves.

Thank you for your kind words. :-)

I loved both of the other Azada games, which is why I demoed this the instant it came out. After playing the demo, I happily purchased it myself. Mind you, since I'm a bigfish member I paid $13.99 instead of $19.99, but I definitely considered it worth it, otherwise I would have never reviewed it. I only review games I love.

I've played the 2/3 of the game and I like this more than the second one. I like that there are only three worlds, because it makes the game feel less segmented. Completing each world feels like more of an achievement.

I haven't tried this one yet, since I'm on a Mac and haven't sprung for one of the emulators. But the first two Azada installments are right up there with the Dream Chronicles, Drawn, Awakening, Empress of the Deep, and (some of) Mystery Case Files series as the best hybrid adventures I've played. I was hoping this one would be along at some point, and I can't wait for it to come out for the Mac!

both of the other Azada games are awesome. i havent tried them actually but ive heard much about them..

Word on the BFG forums is that we'll get our Mac port, though not for a couple months.

3. In front of the Guardian's house

20. House of the Garden Gnome/Town Square

the bug puzzle mentioned in part 17 of 'The First Key'. The instructions don't leave the bugs in the right places.