We all have things we'd like to be able to go back and do over again. That first encounter with your soul mate. The entire TMZ network. And how much better could the early 90s have been if we could only do them over?! Hungry Planet Games has given us a chance to relive some of those days with Astroloco: Worst Contact, a space-themed comedy adventure with an unmistakably 90s feel, right out of the shrink-wrap! 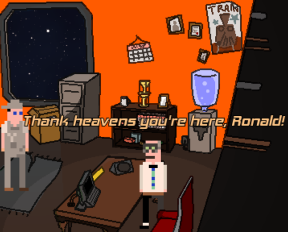 You start the game as Ronald, the janitor at Gilbert Station. It's a perfectly normal train station. In space. When Dirk McScoundrel, CEO of competing Badger Station, resorts to an underhanded ploy to buy the place out it's up to you to fend off both a pirate attack and an alien fleet out for revenge. Occasionally you'll also find yourself playing as Arianne Beckett, daring space-train engineer and pretty handy with a laser pistol too. Together with your train's AI Ralph you'll be negotiating first contact with aliens, space-train-battling with pirates to safeguard a convoy, and exploring the depths of a distant planet (not to mention a clown-infested outhouse).

All this is done using a standard retro point-and-click adventure interface from The Nineties, so there's no having to fiddle with trying to find just the right word—or even manage an inventory system! If you have an item you can use, you do so automatically. For much of the game, there's also an inbuilt hint system; if you get stuck on a quest just visit the office of Mr. Burrows, CEO of Gilbert Station and resident train and video game enthusiast, for a hint. Unlike most games of the era there's no pointless trekking about through screens of Nowheresville to get to your destination either, as you can teleport instantaneously to nearly any location. 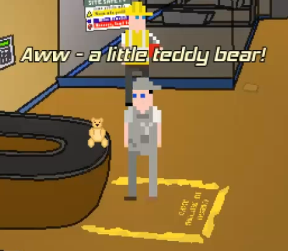 Analysis: Fans of British comedy won't want to give Astroloco a miss. Between the hilarious dialogue and the voice acting throughout, characters have their own distinct personalities and the game feels a little like playing an early season episode of Red Dwarf. The absurd settings and nonlinear puzzle solutions contribute to this, but you won't spend hours poring over them. It's just challenging enough to keep you interested, getting you from cutscene to cutscene, while the game's real charm lies in its dialogue and plot. This is a strong point of Hungry Planet, who won awards in Ludum Dare's Humor category for both Subatomic and Plan M. Expect to find send-ups to many of today's internet memes showing up here and there as well, but it's just as nice to find the game doesn't rely on them.

Throughout much of the game you'll be able to swap freely between playing Ronald and Arianne, enabling you to shift between quests if you'd like to do something else while giving another more thought. The game ends too soon, feeling a bit light, but with a story in three acts and a bunch of mini-games and Achievements to unlock, there's actually plenty of great content to be had. It's true what they say: Time flies when you're having fun!