Project BC's 2014 Indie Game Maker contest entry Ars Harmonia, a visual novel/point-and-click adventure, begins with a dark and stormy night as a strange young woman is pursued by a relentless killer. She's saved by a hail of bullets at the last moment... but her would-be murderess isn't down for the count yet. Which as it happens is a good thing, since that mysterious killer is you, an unnamed woman with an unknown agenda and some seriously strange abilities. Your only clue to find your victim is a name, Fira, and together with your... uh... eccentric liaison Erich, you'll scour the city hunting for a serial killer with unique abilities and uncover the truth behind their rampage. Though most of the game plays out through dialogue, you'll be able to explore some scenes by using [WASD] or the [arrow] keys to pan around, and clicking on people or things to interact. You'll need to search areas for clues to progress, hopping through unlocked locations via the map. 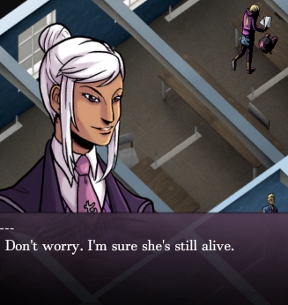 Considering its short development period, Ars Harmonia is one extremely impressive piece of work, with the sort of professional polish and production values you'd expect to see in a much bigger project. The voice acting is solid all around, and the art is gorgeous, though there is a frustrating tendency to be left staring at a stock scenery image while the writing describes an intense action sequence. Similarly, the way the characters stand around smiling pleasantly at one another regardless of what the text tells you is going on can jar you out of the immersiveness of the tale itself. As far as the gameplay goes, Ars Harmonia's linearity means that you'll never really be stuck, and with no real puzzles to speak of beyond figuring out who you need to talk to in order to advance the next part of the story, you'll fly right through it. It would have been nice for the more traditional adventure genre aspects the game is trying to incorporate be more integral to the experience, though taken purely as an interactive story, Ars Harmonia is still a short, intriguing tale that'll whet your appetite for more even if it raises far more questions than it answers.