One of the things I like most about escape games is that many of them can generally be counted on to put you in a good mood, and Detarame Factory's relentlessly adorable Anision definitely fits the bill. You find yourself trapped in a room for unknown reasons, likely lured by the promise of cuddling the ridiculously fluffy alpaca, and despite the fact that there is a bunny on the couch, a lightning bug in a terrarium, and a frog playing defense, you must resist the temptation to stay in this colourful, cute place forever and ever and find a way out. Just click to interact when the cursor changes, and click the arrows at the edges of the screen to navigate the room. You can also click on items in your inventory to view them up close, which is handy since some items can be manipulated this way to reveal their true purpose! 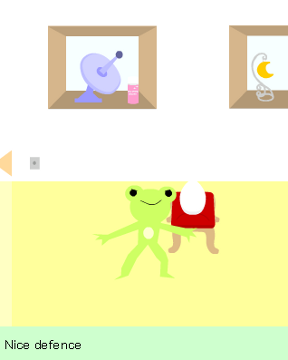 Anision is one of those games that's just an all around joy to play, packed with silly scenes and funny animations on top of its lovely design. For the most part, it's a very logical sort of experience... have a thing without a battery, so find a battery to go in it, for example. Many of the puzzles rely on finding and correctly interpreting clues in the area, so Anision is less about brutal difficulty and more about simple observation... though some of them are very subtle compared to others, making Anision far more clever than its simply sweet aesthetic implies. The changing cursor means there's no pixel hunting, and the clean visuals generally clearly indicate things you can interact with anyway, so you don't have to resort to slowly waggling your cursor over every inch of the screen looking for that magic hidden sweet spot. Anision is about as perfect a coffee break sized escape game can get, and it will give you just enough challenge in ways you won't expect to make it well worth your time.

My current inventory is Picture, Carrot (unuseable, already fed it to the bunny), TV Remote (with battery), Nail Polish Remover, Lightning Bug, and Sketchpad. I fed the mouse the cheese and got the Clown Key, which I used to open the bathroom and change the temperature to 33 C for the alligator. That doesn't seem to do anything, though, and I've tried using those numbers in different places to no avail.

Check the back of the picture. Can you use that code anywhere? Also, are you sure you took everything under the sofa?

For the back of the picture, think number of corners, not number of sides.

I can't seem to

burn the string with the lighter. it just keeps saying the key is tied to it. and I have the lighter highlighted. what's going on?

Examine the lighter and turn it on.

I'm having trouble with the

dark room behind the alpaca. There is no changing cursor to help me find the light switch and screen shots reveal nothing.

I completely missed the part where the game provides you with a camera. Derp.

Cute. I did make an alpaca sad, though. That was sad. Everything else was lovely.

How so did you make alpaca sad? Mine was happy I am sure !

Cute game, I love the way the items were treated once used.

yeah I figured that out. too bad the walkthrough did not say this lol.

Alpaca was the cutest!!

...especially when you straightened its hair