Angry Birds Star Wars is exactly what the name suggests: Angry Birds with licensed Star Wars characters! Developer Rovio has dabbled in different genres in recent months with the building game Amazing Alex and the contraption-centric Bad Piggies, but now the team has returned to old form, pasting together two franchises whose success could never be doubted. Star Wars fans will squeal with delight the moment the title screen starts to materialize, and if by some twist of fate you're not a Star Wars fan, well, it's still Angry Birds, and it's still a whole lot of good-looking physics destruction entertainment! 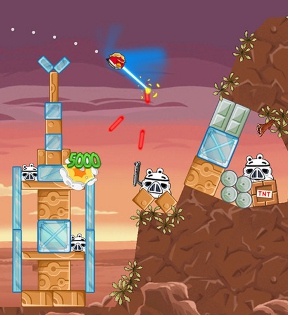 A long time ago in a galaxy far away, some rebel birds were fighting a galactic menace known as the Empire, an evil force composed of Pigtroopers and led by the insidious Lard Vader (who is not one but three pigs, that's how evil he is). The rebels managed to steal plans for the Empire's secret weapon, the Pig Star, and are now racing to deliver those plans to the Rebel Birds. Your journey begins on Tatooine, a desert planet filled with Pigtroopers who have built their structures across the land. As the young Red Skywalker, you must fight your way through pig fortress after pig fortress, uncovering your past and learning the ways of the Force along the way.

Ok, so as far as the plot is concerned, Angry Birds Star Wars probably won't surprise anyone. But the bird/pig twist on the familiar movies does make for some entertaining eye candy, and with the Angry Birds game at its core, you're just about guaranteed to have a good time. As with the other Angry Birds games, you are in control of different birds who can be pulled back and fired from a slingshot to destroy level after level of pig-built structures. Different birds have different abilities, such as Red Skywalker and his lightsaber, Obi Wan Bird and his power over the Force, and Han with his blaster (guess he does shoot first), so you must make clever use of your troops as you carve your way through the game. Along the way, you'll meet some bird-twists on familiar characters and be treated to a series of still images moving the story right along. After all these years, Star Wars is still exciting! 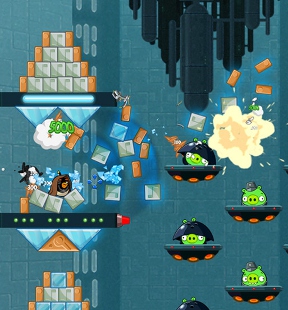 Analysis: At its core, Angry Birds Star Wars is still as Angry Birds as you could ever want. Most of the changes are audio/visual in nature, adding Star Wars art, using Star Wars locations, and porting over Star Wars music and sound effects. We'd be lying if we said it wasn't awesome to mix these two worlds together, and it actually does make the experience feel a lot more epic.

In true Angry Birds fashion, new birds, new piggies, and new environmental elements are introduced as the game progresses. Think Han's blaster is too cool to be real? Wait until you encounter reflective surfaces. Want more R2-D2 and C-3PO? Try unlocking the bonus levels! Lots of secrets to find and plenty of action to be found, so you won't find yourself getting bored anytime soon.

Bad things about Angry Birds Star Wars? Uhh, it doesn't have infinite levels, I guess? The lack of universal support for iOS forces you to choose between small screen or three times as expensive tablet version, which is a shame, but it's nothing new. You'd think by now we would all be getting tired of this game franchise, but when it comes to crazy set-ups and simple fun, Angry Birds seems to have the formula down to a non-degrading repeatable science. It's easy to love but not so easy to master, which is precisely what we want in a casual game.

There you have it: Angry Birds plus Star Wars equals awesome. As if you had any doubt!

World 3: Path of the Jedi

Please explain to me why this couldn't be released as a bonus level pack for one of their preexisting games instead of making YET ANOTHER game in this franchise? Seriously, at least with Bad Piggies they were trying a different kind of game.

While I agree with Rygar, I still admit to having a bit of an "Eek!" moment. Angry Birds is one of those games I don't want to like--too popular--but it's actually a good game. Sucked me in and now I have all the variations.

I feel about the same as dsrtrosy. I never wanted to like this franchise, especially since it isn't that original of an idea, yet they're the ones that got popular from it. But once I tried it, I have to admit it's pretty well made.

This particular branch of Angry Birds offers some nice Star Wars variations on themes, but if it were released as an add-on or something, I think it would lose its impact. It's great being in Tatooine, seeing piles of junk conveniently shaped like a jawa sandcrawler and thinking "yep, I get it!".

The only thing I want Rovio to do: stop separating iPhone and iPad versions of the game. Just release a universal app already!

@JohnB, i don`t think they will separate iPhone and iPad versions. It`s not profitable. My greatest problem was to transfer my progress from iphone 4s to my sister`s ipad3. moreover i don`t have a mac, so i had to find some solution with my Acer. softonic helps.

World 3: Path of the Jedi