You knew it'd happen, and almost by surprise it appeared! Rovio's Angry Birds Star Wars II has been unleashed, packing in over 30 playable characters from the Star Wars universe along with a somewhat unconventional tie-in with real-world toys. At its core, this new Angry Birds game is still Angry Birds, which means you know it'll look good, play well, and offer a lot of entertainment for a relatively small price tag. 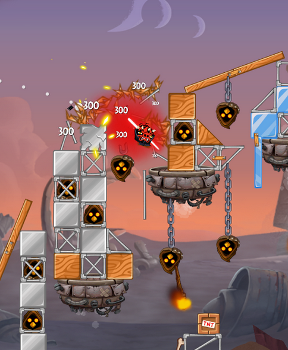 Angry Birds Star Wars II works just like any other Angry Birds game. You start with a few birds on the left, ready to be fired from a slingshot. Tap and pull back to choose the firing angle, then release to send the bird flying. Characters have special abilities you can unleash, such as pulling out the ole lightsaber to tear apart the rickety pig structures. Part of the fun is finding new and efficient ways to knock out all of the pigs. Another part is doing it as bird versions of popular Star Wars characters!

The thing about Angry Birds Star Wars II is that you can tell it's just showed up for the paycheck. The marketing talks about joining the Pork Side, which is kind of funny seeing as how that's what the game seems to have done itself. Angry Birds Star Wars II is almost exactly like its predecessors. The only talking point is the 30 new characters, which admittedly is kind of entertaining, but ultimately there just for the tie-ins. Unlocking those characters is an exercise in in-app purchases and buying Telepod toys, physical figurines you bring home and "scan" into the game. A bit excessive, but seeing as how almost half of Rovio's 2012 revenue came from the sale of physical goods, it was inevitable something like this happened at some point.

Once you look past the income vs. innovation tug of war, you'll still have a great time with Angry Birds Star Wars II. It's Angry Birds, after all, and integrating Star Wars settings and characters is a treat no matter how you cut it. The base price tag is low, it's a universal app, and you can unlock a lot of content through regular play, allowing you to keep your wallet closed unless you just can't stand to live without that Darth Maul Telepod.