Amaranthine Voyage: The Shadow of Torment

Do you think it's frustrating living in a fantasy world? Every time some big, dark evil appears to threaten the land, which happens every other Thursday, there has to be people who are like, "This is garbage! We can handle this ourselves! We can do this!" But then the rest are all like, "Man, you know how this works. You have to wait for some random chosen one berk to show up and take care of things for us. Stop trying to be in charge of your own destiny." In Eipix Entertainment's hidden-object adventure Amaranthine Voyage: The Shadow of Torment, an archaeological dig goes awry when your students activate a strange artifact that looks like a Fabergé egg and a perfume bottle owned by a 1920s madame had a baby. Soon, you find yourself in a mysterious, fantastical world beset by a danger known only as The Torment. With a student who has about as much restraint as Dee Dee, you must stop the threat if you want to find a way back home by solving hidden-object scenes and puzzles, as any legendary hero would do. Hope you like pink and purple lens flares! 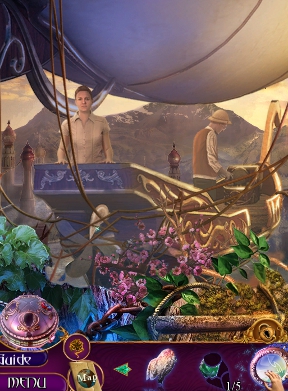 Being of course the cynical hardcore gamer that I am who typically sneers at anything without at least three explosions and a knife fight, I usually find it hard to get into the fluffier fantasy games. But, you guys, this game is so pretty. Eipix seems to have pulled out all the stops, and fluid animation and a veritable riot of colour in every conceivable hue (... but especially pink and purple... ) with environments packed to the gills in detail makes The Shadow of Torment a nonstop feast for the eyes. Though burdened by a lot of back and forth, the story is interesting and the characters are lively in a way that makes this the sort of "all ages" game that really doesn't need to have an asterisk with "... but mostly for the little'uns" attached. Admittedly, if you're not into cute fantasy creatures and nonstop visual effects it might be a bit much to take, but hey, that's what demos are for. There's actually very few times the game isn't just hurling minigames and puzzles at you, which keeps things interesting, though on the whole the difficulty level is still set fairly low.

In fact, it might be because there are so many puzzles and minigames that the game is as easy as it is, since none of them are really developed much. They look good, and variety is always great, but you sort of keep waiting for the game to grow some teeth so it doesn't whiz by as fast as it does. The abundance of colour and detail can also make it hard to tell what you're looking at in hidden-object scenes since the visuals aren't as crisp as they could be. You don't need to have played the rest of the series to enjoy this one, and if you're looking for a game that really attempts to fill every bit of your time with new tricks and mechanics, Amaranthine Voyage: The Shadow of Torment comes highly recommended. Fans of fairytale fantasy will love its lush presentation and cinematic story of another world in peril, and even those of us who typically think ourselves too cool for school might want to give the demo a try. It's rare that you find a casual game you can tell is really trying as hard as it can to give you your money's worth and then some from the experience, and as a result, this one stands head and shoulders above most others in the genre.