Teaching is becoming more and more demanding these days, especially when one of your students manages to open a portal into a parallel world and you have to go chasing after him. Of course, it turns out that the parallel world has a power-hungry ruler who turns you into a monster and you are the only one who can break the curse and you're pretty sure you left the stove on at home... Some days it just doesn't pay to get out of bed. In Amaranthine Voyage: The Living Mountain, the new hidden-object adventure by Eipix Entertainment, you take on the role of the intrepid professor Burns, as she travels through a magical land and tries to save it from the clutches of the evil king Demario. 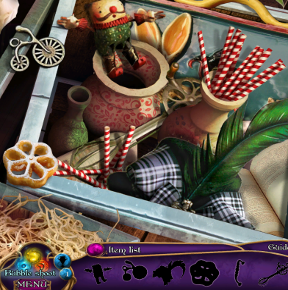 At least the land is pretty stunning, so you're got that going for you. As you walk around, collecting stray objects and opening other people's cupboards and chests, you'll encounter one breathtaking landscape after another, not to mention the elegant architecture and, er, an ancient stone golem or two. Alas, you aren't here on a holiday. There's a kingdom to be saved, and between you and victory stands a mighty tyrant. The land relies on a balance of power, represented by two crystals; one is given to the ruler, the other to the Guardians, a council of mages. Since Demario has pulled a Macbeth and taken all the power for himself, you have to find a way to take his crystal away and restore the Guardians. And, if you have time, bring your student Jonathan back home, along with a lost puppy. You better get some overtime pay for this. 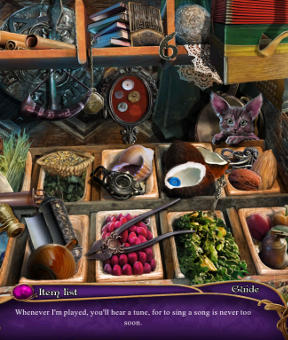 Amaranthine Voyage: The Living Mountain doesn't stray too far from the familiar formula. There are items to find, puzzles to solve and stuff to interact with. Lots of elements follow standard patterns, but they are still enjoyable – the puzzles aren't terribly innovative, but they're certainly adequate. There's also the (seemingly compulsory) adorable sidekick, but how can you say no to an eager little puppy? However, it must be said that there are real attempts at refreshing the genre. For one thing, hidden-object scenes are varied, from text lists to silhouetted lists to riddles. Also, you are given a bow to use on items that are too high to reach, and the shooting system lends an almost arcade feel to the action sequences. The story is dynamic and has enough twists to fill an entire episode of a soap opera, but still manages to follow a coherent line. The Living Mountain might not be a game-changer, but it tries, and it delivers an average of four hours of magical entertainment.

Amaranthine Voyage: The Living Mountain is currently only available in a Collector's Edition, which includes a bonus level, concept art, wallpapers and more. Remember that Big Fish Game Club Members pay only $13.99 for Collector's Editions (or 2 club credits), and collector's editions count 3 card punches of 6 total needed for a free game.