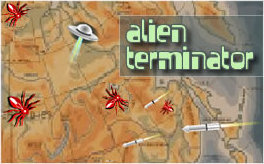 Alien Terminator seems at first to be a mindless click-the-bug shooter, though to play through several levels will reveal a rich and addictive gameplay experience.

Your basic mission is to terminate all the "unknow creatures" by firing missiles at the creepy crawlers. For the first couple of levels this is rather easy since the creatures are barely moving: Simply click on any of the bugs and the missile will eventually land on it, though several direct hits are required to do away with each one.

Things to keep in mind: It takes a couple of seconds for each missile to arrive at the target, therefore during later levels you will have to estimate where you think the bug will be when the missile hits. Save up your missiles, since when you run out the game is over. You get an additional set of missiles with each level completed, and the unused missiles get carried over to the next.

It's a very easy game to get started with, and then ramps up in difficulty with each new level—13 total. There is also a variety of sound tracks (it changes after level 4), and did I mention the gameplay is addictive?

This game is okay. I might like the game better, if I could actually hit one of those "ants."..lol

For the record, the link on this is dead.

Thanks, Suho1004 for the note. Apparently Danny has moved his games off to another site and I couldn't see where the correct link to Alien Terminator is now, so I am mirroring the game here for the time being.