Won't you take me to... Funkyland? Largely because it looks like a pretty sweet place to be. The prolific developer's colourful (and often candy-themed) escape games have only been a staple of our Weekday Escape feature thus far. With the start of a new series, however, in Alice House: No. 1 The White Rabbit Hole, we figure, hey, Funkyland, you deserve the spotlight for once. Four for you, Funkyland! You go, Funkyland. As the title might imply, The White Rabbit Hole takes place in a very Wonderland-ian setting, and to escape, you'll have to find five rabbits. Or images of rabbits. Or a cup with a rabbit on it. Funkyland is not constrained by your plebeian definitions. Ce n'est pas un lapin. Just click to explore and interact. There's sadly no changing cursor, but if you're diligent in your exploration, that won't be a problem. Some of the rabbits are hidden in plain sight, but you'll need to solve puzzles to figure out how to take them. Your inventory is at the bottom of the screen, and you can click an item to highlight it for use. Weird? Hey, we're all mad down here. If the music starts to get to you, tap the plus icon at the top of the screen to visit the menu to turn it off. 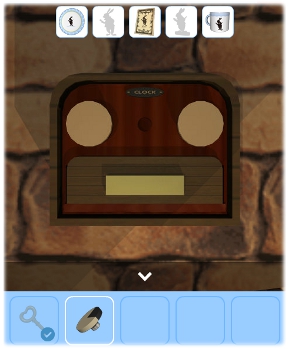 Funkyland is one of those developers who brings a certain amount of joyful whimsy to the escape game genre, but even despite its crazy setting and fairytale subject matter, The White Rabbit Hole still manages to be a tidy little game. It's not particularly long, and there isn't a whole lot to explore, with a focus on finding clues rather than the usual plethora of items you sort of expect from an escape game. It's an easy game, but also clever in its own way, and with a whopping nine planned installments, sets the Alice House series up to be one of those fast, fun escape snacks you look forward to. The title screen actually implies this is the first series in, well, a planed series of series... es... with the heading Princess House Series 1, so if you enjoy this one, it looks like you've got a whole lot more coming your way. Simple and weird, yet also logical in its own way, Alice House: No. 1 The White Rabbit Hole is a charming little escape and a great introduction to a developer who's been delivering quality free games for a long time now. Just don't turn your back on it. They got them hoppy legs and twitchy little noses, and what's with all the carrots? What do they need such good eyesight for anyway?

Loved it! Felt like it was a step up from the Candy Room and Fruity Kitchen games!

I think I understand the "bug" Dora mentioned in the review. This should clarify it:

You can only carry one key at a time. Pick up another one, and the previous key is replaced where you got it.

This was so much fun! It was quite a whimsical experience.

That didn't strike me as a bug,

more as a sort of puzzle via hide and seek or trial and error for those who do not catch the clue. After all, aside from the key created by finding all five rabbits, the heart shaped key is the only one that can be used of the several found within the game.

Here I am thinking I am a smrt people breezing through this game, and I'm stuck.

I've got 3 of 5 treasures/trophies etc (1, 2 and 5.) I've solved the clock, letter/number, and tied jar puzzles. The only item I've got left is the lamp, although there's one open space left. I can't find anything else to interact with that wasn't part of another puzzle. What am I missing?

Power of posting I summon thee!

the bunny (#2) and the use for the lamp. Now I just need one more item and one more trophy. Whatever the rectangular thing is...

OK NM got everything. Remember kids, if a game seems hard just keep reaching for success and you'll get there! I believe in you!

Got all except the middle rabbit... Any clues on that?

As with all Funkyland games, some are easy to find. So was this one (under the closet)

It took me a little bit to figure out what was going on with the keys but I got out of there all by myself. wooooo!

Thanks Infant Tyrone, for not bothering to say what you figured out with the lamp. Because posting that you figured it out, really helps everyone else that plays it and is stuck at that same place.

I just read the review to see what the deal was with the bug and the hint seems a bit spoilery. Figuring out that

you can only hold one key at a time is one of the puzzles. At first I just thought it was letting me hold a few keys but then I noticed that I couldn't open the lock with my stack of keys. Then I noticed that the old keys went back to their spots. I also thought there was a key in the locked cabinet until I figured out what really was going on.

Saying you figured it out helps helpy folks not bother helping. Are you interested in lamp help?

I like funkyland games. the walkthrough should be awesome once it's posted :)

A clue to using the lamp:

Stick it where the other lamps don't shine.

In this game, instead of views, you get rooms. I've numbered the rooms from 1 (starting room) to 4 (exit door).

Look closely at the blue shelf to the lower left in room 2.

It's underneath the shelf, kind of stuck between the shelf and the wall.

Take the lantern from room 3. Use it to illuminate the hole in the wall to the right of the door in room 2. Take the rabbit hiding at the back.

You know the drill from here.

I agree that the "bug" mentioned in the review is not actually a bug as such.

Liking very much the anticipation of a future chapter.

Yes, I had misinterpreted what was happening because of the way the game displayed things. :) Review has been updated.

Wow I really enjoyed this stylistic change from Funkyland! Of course I always liked the bright happy candy and fruit escape games. Perhaps the company was, in part at least, honing their conventions and programming so they would be ready to embark on their next endeavor. I am impressed.

I thought the fact that you could only carry one key at a time was maybe not the best interface choice simply because it apparently caused so much confusion. Stylistically it made sense, though, since there is only one item (aside from the exit door) that can be unlocked. It also made sense for the programming and design perspective. Why carry around a boatload of keys that can't be used when it affects the layout of the inventory at bottom? As soon as you found the place to use the key you realized what needed to be done and adding more keys no longer made sense. It's just the escape room habit of picking up Everything Ever that confused us (also keeping in mind the style constraints imposed with Funkyland's standard size/inventory format).

In any case I am definitely looking forward to the next installment!

I think this was a big step up for Funkyland! Great music, good theme, nice visuals. The "number puzzle" was just challenging enough for me. (I'm not a huge fan of puzzles; I prefer finding/using/combining items.)

The key thing *did* throw me ... and I honestly thought it was a bug. I was going to reload the game but thought I'd check out the comments here first.

Thanks to Infant Tyrone for the clue to the final rabbit!

For the record, regarding the key I assumed

that each key you picked up was combining with the others to alter the shape of the base key until it was the one you needed. It made sense considering, well, Alice in Wonderland is weird. It wasn't clear to me that you were exchanging one key to another. I must not have noticed the other keys reappearing in their places because it wasn't until the end I saw one after completing an unrelated task and I assumed it was a bug.

Dora, did you notice that I posted a walkthrough last week?

Delightful game, charming, and easy enough that I did not need a hint.
Highly recommended for people new to escape games. Collecting the rabbits gives a feeling of accomplishment.
I am SO looking forward to the next instalment.