She's traveled through The Cave of Heroes. She's asked what's The Deal With The Gods. Now Alexia Crow, tourist and reluctant chosen one has to face the most dangerous peril yet: the third game of a trilogy! No, wait... I mean: Pandora's Box! As in the Pandora's Box... the one with the bad history in re: unleashing things? At the very least something of equivalent danger. Chiron wants her to destroy it and it looks to be in that shady office buildinge. Since the outside is secured by all kinds of weird puzzle junk, you know that the inhabitants are up to no good... the "millions of lives are at stake" kind of no good. Alexia Crow: The Pandora's Box is the concluding chapter of QuestTracers' point-and-click adventure saga, where a hero finally discovers her destiny. 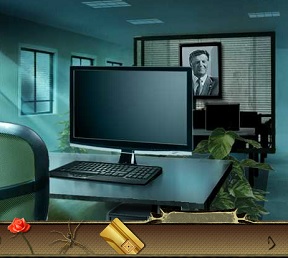 Click to interact with your surroundings, though be warned that the cursor won't change except to show you area transitions. If something looks like it could possibly be picked up, then click it and do so, as you'll likely need it later. Drag the items you do find from your inventory at the bottom of the screen to where you'd like to place them. Also please note the button in the lower-left that will remove the 3D warping effect. One has the feeling it'll be seeing a lot of use. The Pandora's Box maintains the positive aspects of the previous installments in the series, while sadly also falling victim to its flaws. First, the good... the art is as rich and detailed as always, even if sneaking around a dimly lit office is inherently less visually interesting than skulking about ancient monuments. The puzzles are generally logical, even if this company is bit heavy on using Conceptis-style grid-puzzles to protect their important files. The big drawback is the game's interface... the rough edges present earlier in the series that are even rougher here, where it can sometimes be a struggle to get the game to let you solve the puzzles you know you have the solution to. For all its technical flaws, however, The Pandora's Box proves a satisfying, if twisty, conclusion to Alexia Crow's story and fans of the series will enjoy seeing how it all turns out.

Probably the easiest of the 3. The only gotcha for me was that I couldn't pick up the pen the first time I tried.

Where is the location of the lock box combo?

What is the blub for?

I thought the content of the puzzles was good, but the interface left me constantly annoyed. For one thing, text boxes kept covering places I wanted to click. For the sliding block puzzle, I had a hard time getting the block to go where I wanted it to. I knew to click in the square where I wanted it to move, but for some reason (maybe because I was trying to go too fast) I did a wrong move several times and had to restart. After all those tries when I was finally near the final move I accidentally clicked on the restart button, which is conveniently located right next to the playable squares.
Lastly, when using the pen it isn't intuitive where to position it over the target.

I was pretty sure it went the box with the hole, but I'd click the end of the pen on it and it would say it didn't fit. I tried both ends of the pen and it still didn't fit. So I looked for other stuff to stick in the hole.

It turns out you need to click the middle of the pen on the target, which is really not intuitive. It would be like needing to click the center of a mouse pointer on something rather than the tip of the arrow.

How about NOT having a set of buttons where no matter which you click they all open your stupid link back to your SPAMMY GD site?

In fact, apparently you can't click ANYTHING in this game without it opening the damn link back to your site.

Yeah, the game is basically unplayable unless you want to continually open and close new browser windows every single time you click. No thanks.

That happened to me the first time I tried to play. It seems to have stopped now.

My game seems to be frozen on accessing the card reader. It just keeps "loading" in game. I tried refreshing the page and resuming my saved game but I can't get past this spot.

I have been asked recently to minimize my requests for walkthroughs per game so i'm only asking once. I hope one surfaces soon :)

Yeah, this is absolutely unplayable. No matter what I click on in the game it opens a new tab to the zibbo gamesite. It's only a problem with the version hosted on JIG as I can play it without hassle elsewhere.

I guess no one has a walkthrough yet huh?