Far back in the primordial mists of 2015, Danil Zhuravlev gave us the physics-based puzzle platformer Absorbed. Now, in the far-flung future of 2016, we've got Absorbed 2, which sadly isn't called something like Absorbed 2: Absorb Harder or Son of Absorbed. Our portal-hopping hero once again needs to use his very unique gun to get past enemies and obstacles, Kirby-style... which is to say, by using it to suck up crates and enemies and spitting them back out, whether to use as stepping stones or weapons. [WASD] or the [arrow] keys are to move and jump, while [X] or [K] sucks up whatever block or enemy is in front of you, or spits out whatever you're carrying. Want to just drop it gently? Tap the [spacebar]. Some things, like crates, are fragile and will break from the momentum when shot at something like a wall, while others are sturdier... and of course making an enemy explode by firing his own terrified comrade at him is always enjoyable, and also the reason why the President has stopped responding to my proposed battle strategies. 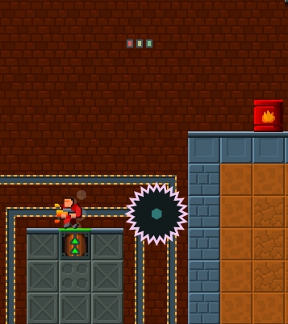 Absorbed 2's biggest strength and weakness are basically the same thing... it's the original game. Not much has changed this time around apart from the zombie focus and gorier deaths, and unfortunately, the movement is still juuuuust springy and slippery enough to be annoying in places where the game stresses platforming, especially since solid crates and barrels still wobble around at the slightest shift when you're trying to stand or land on them like they're one of those sand-bottom-filled beach balls. (I'm not that old. You know the thing... right?) It's not a bad game at all, it just would have been nice to see the core concept expanded on and played with a little more. As it stands, Absorbed 2 basically feels like a level pack with a few new elements, and it's still fun to fire a zombie into a spinning sawblade, or, this time, lure them into a field of mines. As the game progresses and the levels get bigger, combining more objects and obstacles, the stages become more creative and fun to leap and blast your way through, though weirdly, the absorption gun feels downplayed compared to everything else. If you enjoyed the original, Absorbed 2 and its funky soundtrack are worth a whirl, and is a great way to spice up a coffee break... though admittedly I feel that way about any game with limbs that fly off in every direction.