Danil Zhuravlev's Absorbed is a physics puzzle platformer about science... the weird kind. You've been given a gun to test that can absorb whatever you point it at, and spit it back out. Handy for moving heavy objects around, but there's that whole teeny-weeny "accidentally causes a cosmic chain reaction and teleports you to a strange and hostile place" problem. Use [WASD] or the [arrow] keys to move and jump, and hold [X] or [K] to either absorb something in front of you, or spit it back out. You can do this to create stairs, defend yourself against enemies, and more, but make sure you activate the blinking checkpoint beacons so you can respawn in case something... unpleasant happens to you. Like blowing yourself up with a case of dynamite. Happens to the best of us. 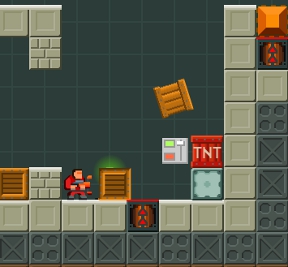 Absorbed starts off slowly, but gets more interesting as different blocks and mechanics are introduced. The aforementioned dynamite can, for example, blow up groups of enemies (or, um, you if you're standing too close), while stone can rocket right through a line of them. You can even suck up enemies! Once the game starts playing with these and introducing other elements, it gets a lot more interesting, though it still feels like it leans more towards platformer than puzzler the majority of the time. There are switches to press, bouncy pads, disappearing platforms and more, all set to the sort of funky soundtrack that makes me think this whole thing was orchestrated by the Blues Brothers. The physics tend to be reliable to work with, though the movement is juuuuuust slippery enough that single-block platforms can be a minor annoyance. At least the stars are only representative of your score for each level... you can die as much as you please and keep respawning. It feels like it could have used some sort of story to tie things together and keep you hooked throughout, but Absorbed is still a fun, solid little puzzle platformer that makes the most of its time without overstaying its welcome.

This was fun. I haven't had as much fun dying in a game in a long time.

This game is great! Well-paced, just frustrating enough, and a decent length.

Great game. Easy enough to finish in one sitting, but also plenty interesting enough to go for a perfect record.

One complaint - I went back to get three stars in all the levels, and it reset my progress on all the levels after the first one I revisited. Of course, the ones I already had three stars on were fairly easy, so it wasn't a big deal - but a bit annoying.