When a main character looks like something that walked out of Donnie Darko and wanders a bizarre, natural world that must be Samorost's neighbor, you know things are about to get more than a little surreal. Antennaria Games delivers that surrealism in spades in A Rabbit Fable, a point-and-click adventure where one rabbit's fanciful reality, dreams, and memories all meld together. Click to move around, collect items, or interact with other characters and objects. The lack of a changing cursor leads to the occasional pixel hunt, however, most important areas are easily distinguished from their background. Many of the puzzles require solving some bizarre concepts, but are not nearly as difficult as they first seem. Often, they can be solved by simply collecting and combining items in your inventory and delivering them to the right characters. 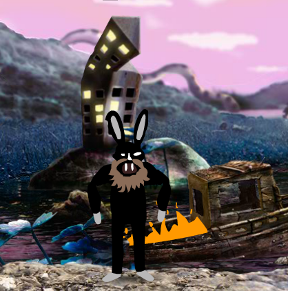 For a story with a protagonist that has no real dialogue, there are some surprisingly emotionally engaging moments. It's hard not to feel a pang of regret when you see the poor rabbit's head hang in dejection as he peddles off pieces of the one thing left he holds dear. Having to constantly trek back and forth at a frustratingly slow pace hinders that immersion, but the charming moments of levity draw you back in and keep the tone from going stagnant. A lot more can be said about this short story of a lonely soul who only seeks love and greener pastures, but A Rabbit Fable is odd, imaginative, and special in a way that needs to be experienced rather than told.

I don't know who you magic pixies are, but I sure like your pixie drink.

I enjoyed the game, and thought that for a first effort it was well done. Some glitches with movement that I hope they work out in the future. Clicking on a destination can send Rabbit on an odd course. And his movement could have been sped up a bit.

The storyline could be more focused. My take on it all was a "reach for your dreams" message. But why I had to assemble and distribute geometric shape, and wear different hats is open for discussion :-)

The artwork, music and sound are exceptionally good, and kept my interest level up enough to overlook that.

Enjoyed this. I think the slow-paced walking adds to the dream-like quality of the game and to me, doesn�t need too much speeding up -- (maybe just a little), or perhaps the rabbit�s path could be straighter. Only issue I had was the inventory box would not always close and so I missed some of the story�s animation.

First and foremost, I commend those who are able and creative enough to make games for others to enjoy. That being said, this particular attempt missed the mark. I have played many other games with dream/fantasy themes and, although not my particular bag of worms, this genre is prevalent enough to warrant a pass for content. However, the monotonous back and forth from one side of the screen to another...at a such a ridiculously slow pace and such off-the-mark character movements, made this game almost unplayable. For sheer want to not leave a game incomplete, if possible, I trudged through to the end. Whew! My apologies if I have hit a nerve with some folks (having a negative opinion seems to do that), but the truth shall set you free!

I see the storyline differently, Zeke!

The black rabbit at first just wanted to be loved, and thought being successful at what he liked to do would lead to being loved, and being somewhere nicer. So he enters his model house in what looks like some kind of competition... but his house is the opposite of what the judge wants, so much that it's laughable.

In the pit, he needs to peddle off the parts of his house to get anywhere, but he can finally give important people what they want, even if he's no longer being true to his dream. He even finds a way to get a production line and employees! Life is good for him, maybe.

But then he has a dream. Here's his house, full-size, complete with friendly neighbors who like him. But to get inside, he has to compromise himself, make his new friends hate him, and even destroy his house. But look, he's appeasing the important people, this must still be good... except when he gets inside, when he can finally be loved, he realizes his "dream girl" is an empty ideal, and making all these sacrifices to be successful is destroying what building his house originally meant to him.

So he goes back, shuts off the assembly line, and leaves. He needs to let go. He's invested so much time and energy and work into this dream of building a house and being successful, and since he's not sure he can make that happen anymore, he needs to step back and make peace with it.

And then he meets someone. Someone who's not an abstract dream girl, but an individual. And he didn't need to rise to some arbitrary level of success to deserve her... love just happened because they were in the right place at the right time and they liked each other.

With the support of another person who cares about him, he works toward his dream. It's not quick, and it's hard work, but together they can make it happen and they're happy at the end.

I guess I could make some feminist nitpicks LIKE ALWAYS, HUH, but I thought it was a really sweet story with a good moral and I liked it a lot. I didn't have issues with walking paths like some people did, and I thought maybe the rabbit could have moved more quickly, but I'm glad I got to play this one.

I just realized that my previous comment could come across as rude or accusatory to Zeke, especially that last bit? I'm really sorry if that's the case. Zeke, I don't remember ever having talked to you and I'm sorry if my comment read as unpleasant- this was just an attempt to poke fun at my own tendencies. C:

New version now online: that fixes some of the bugs players have been experiencing.

@hyena - I enjoyed your comment, and you didn't come across as rude at all. Offering different perspectives are a large part of what these comments are all about, and I certainly don't expect others to think as I do. :-)

Hi, I'm the developer, thanks a lot for the comments. Thanks Trinn for the review!
@Zeke: it's an alienated work...why I have to develop pieces of software for companies that I don't know even in which country they are located? I want to make games, they want stylized boxes...(it's personal, so it's my game). But I'm glad you could finish it, and you still like it, that's important for me!.
@HammyJay: your comment it's totally welcome!, it's a personal game that was turning in my head, it's not as arbitrary at it seems, but I understand looks very cryptic.
@hyena: Thanks a lot for the effort on the interpretation. You're quite accurate, and I'm very glad with that. As I mentioned above I was thinking that it was very cryptic, but you and another guy in another portal interpreted very well the story, I'm happy with that. And and there are still plenty of metaphors floating around...
@jcfclark: Thanks for playing and for the feedback. I updated the game, and now the rabbit walks faster. But we're going to fix the inventory for the next game...

Thank you for stopping by to provide some feedback!

Am I correct in assuming...

That the story is an allegory for game development? It seems the character seems to waver back and forth between pursuing personal fulfillment or financial success at the cost of conformity.

In particular, I found the scenes in which the protagonist has to take the broken pieces of his rejected idea and watch the "consumers" hands rub off all the pattern, color, and creative identity from them very moving. Even more so when he abandons his independent work to go to the factory that churns those blank, empty pieces out to meet consumer demands.

I imagine there are lots of ways the story could be interpreted, but that section really resonated with me. Whatever the case, it's certainly fun to analyze :)

@Trinn: yes, is as clear at it sounds.

It's not really an allegory of game development itself, any kind of 'creative' work can be frustrated with the real 'productive' demand. And in the dream scene you experiment the total 'burnout' a cause of the work: each action it's a metaphor of that feeling...but I don't expect people could stop in an online game to over analyzed.

I'm actually very pleased that people have interpreted the game so deeply. Thanks (and sorry for my English).

I hatched the egg, the bird flew away, but I didn't get the tear. Now I can't walk to the side, the screen's stuck on the tower.

@inheritance.fan: if your read this (I hope you do) which version of browser and SO are you using? I can't replicate this glitch and many people are stucking there...

I wonder if I'm the only one who just thought that it was a cute adventure game without a heavy lesson :/