99 Bricks: The Legend of Garry 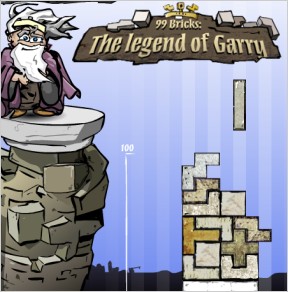 RPG elements seem to be all the rage nowadays. I'm not sure when RPGs became the genre that "all the cool kids are doing", but they, or at least their characteristic markings, have enjoyed a certain ubiquity in games of late. Match-3 games, word games… pretty much every game and their grandma is jumping on the RPG train. So it should come as little surprise that the phuzzle (physics puzzle) branch of the casual game family tree has finally followed suit with a tricky title by the name of 99 Bricks: The Legend of Garry, from Weirdbeard.

The realm of Brickonia is in dire peril, and only the vigilant Garry can save it, guided by your unseen hand and your brick-stacking aptitude. Journey from town to town, unraveling puzzles that call on you to build a tower as high, as dense, or at times, as short as you can. Your building blocks will plummet from the heavens Tetris-style; the [left] and [right] arrow keys steer your brick's descent, the [up] key (or [space]) revolves it, and the [down] key hastens its fall. [C] destroys your current block while [V] unmakes the last block that was placed, although discards and "undos" are both commodities in limited supply. Completing levels will add gold to your satchel, which can be used to purchase additional discards, undos, and other upgrades that should ease your stacking woes.

The medieval story's about as cute as a muffin baked in the shape of a kitten named Sparkles, though it seems strangely draped over the game in such a way that begs the question if it was even necessary at all. It'd be like if Pong 2 featured a hero named Paddleton the Brave, who must overcome the dark machinations of the evil Lord Paddlegore by collecting the Five Green Balls of Destiny. It certainly doesn't hinder the gameplay, but it feels odd, especially when one considers the straightforwardness of this game's predecessor. Thoughtfully, the classic mode is included and selectable from the main menu, just in case you feel the urge to stack like you've never stacked before.

The game adds new kinds of bricks to mix up the game, and downright devious puzzle levels which may require some mental yoga on your part. The puzzle levels are a welcome break from the other towns, which start to follow a sort of "Build A Wall That Is Level Number x 10 Bricks High" pattern. There's enough challenge to gnaw on in the later tower sculpting levels that they should keep you busy, though, and the game's crammed with enough charm, stacking satisfaction, and RPG elements that it ought to keep even the most casual architects entertained.

Play 99 Bricks: The Legend of Garry

Played this days ago, and still am not able to beat it though :(

Brilliant! I always loved 99 Bricks, but wished there were new/different challenges to it. This is perfect.

Can I start the movement to ban this monstrosity? --> phuzzle

I groan every time I see it, here's hoping it will phyzzle out bephore long.

Oh and it's a phun game.

Solution to Puzzle 4, which stumped me for a while:

Challenging but I'm always up for some tetris-like fun.

Has anyone figured out the best way to keep the tower sturdy enough to reach a height of 600? I am stumped on these last few levels.

Some descriptive words that first came to mind: intriguing, polished, improved. When I played it did seem to look up to standard, great graphics, story, and mechanics. I decided to strive for perfection first before moving on, I did so for level 1. Here is my result - http://img132.imageshack.us/img132/950/awfulgamepicforjig.jpg - which defines the awfulness of the game, still good, but not worth the time.

Cerulean, can you explain your puzzle 4 numbering scheme?

Puzzle 4 is still stumping me... I wanna get it on my own, but I might lose it so, please help (anyone).

@ NohWoman - There is a link to a video walkthrough of all 5 puzzles below the game windown and to the upper right of the description.

P is the platform, and 1 is the first block that falls, and so on.

anyone got a screenshot or whatever of the result of no drop 2?

I hate the last level. It doesn't matter how neatly you build your tower. If you get above 200 it gets unstable. I did get close to the top a few times (±570, building a straight line up at ±180) but you can only beat this level if you're very lucky.

I'm also stuck @ tower 8 and no drop 3... it's impossible.. and I cannot find any walkthroughs for those 2... can anyone help... been trying it for weeks now pfffff

Puzzle 1 irritated me, and the narrator didn't help at all. That's what bugged me the most about this game was the artwork, it looked like it was bad on purpose, which just doesn't go over well with me.