9: The Dark Side of Notre Dame

The name Notre Dame conjures up many visuals: towering flying buttresses, sublime stained glass, and a hunchback in love lurching through the bell tower. Now Play Favorite Games has added more to the legend with 9: The Dark Side of Notre Dame, a stunning adventure hybrid with hidden object elements which takes place in and around the "Grand Dame" of Paris, as Victor Hugo so fondly remembered her. 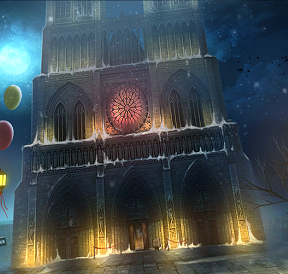 A little over a year ago Play Favorite Games came on the adventure hybrid scene and blew us all away with 9: The Dark Side. Well, they're back with an even better sequel in 9: The Dark Side of Notre Dame, a continuation of the story of the war between the Guardians and the Clan, as well as a modern retelling of The Hunchback of Notre Dame. Someone with access some pretty dark magic has animated the famous gargoyles of Notre Dame, causing them to kidnap the daughter of a prominent and wealthy Parisian. Fortunately this took place during the Festival of Fools, so all witnesses thought it a great prank and part of the festival.

The inspector in charge of the kidnapping, Inspector Charmant, recognizes that magic and flying gargoyles are out of his purview, so he has contacted you personally, being that you are "The Last Descendant" of the guardians, as learned in the first game. The Inspector cannot risk his career on this "supernatural" option, so his briefings come in the form of clues and communiqu�s left hidden in and around the historical cathedral, giving you the player an idea of what is going on and him plausible deniability if anyone finds out that the Paris Police has hired a supernatural expert. 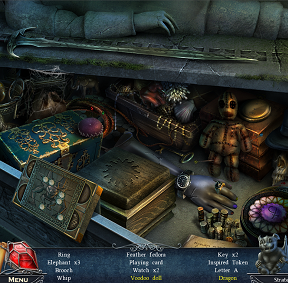 All you need to do is point and click your way through the stunning (and pretty accurate) scenery and solve the mystery with the help of the Inspector's clues, your own wits, and a charming gargoyle companion who is happy to lend a claw when something is outside of your physical ability. The bottom loading inventory and helpful refilling hint timer is augmented with a really useful map that not only shows areas with unaccomplished goals but which also allows the player to instantly transport themselves from one place to another, eliminating a ton of back and forth wandering. The glowing red guardian amulet is also back, this time its ability to find the evil runes hidden the scenery have an added bonus in being able to give life to whatever stone statues happen to be nearby, explaining your friendly gargoyle companion Gladriel.

Sparks of light and cascades of sparkles point out areas of interest and a handy changing cursor will help along the way pointing out places to go, people to see, and things to do. As with the first time around, 9: The Dark Side of Notre Dame packs a ton of gameplay into every frame with regular hidden object scenes, fragmented hidden object scenes, puzzles, and a wide variety of mini-games ranging from the simple to the devilish. Standard hidden object scenes feature a nice array of interactivity to find all of the items listed. Can you find the kidnapped girl and help the modern day Quasimodo and Esmeralda find happiness as well?

Analysis: Sequels to really well-made games can often be let-downs, inferior product rushed hastily to market to capitalize on the success of the original. Fortunately, that is not the case with 9: The Dark Side of Notre Dame, which actually manages to not only live up to the original but actually surpass it in some aspects. 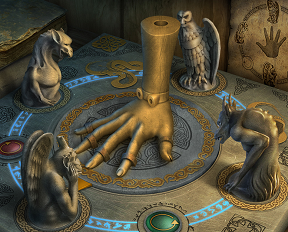 The visuals are of course a treat, sharp and clear despite the night-time setting, not necessarily a difficult feat considering that everything takes place in and around one of the most visually exciting places in the world, Our Lady of Paris. The music is appropriately spooky and mysterious, adding to the atmosphere. Where 9: The Dark Side of Notre Dame really excels, though, is in the gameplay. Play Favorite Games has once again thrown everything but the kitchen sink into the mix, giving us an exciting and challenging series of games and puzzles to enjoy while trying to solve the mystery.

A great improvement is that handy map, a feature not available in 9: The Dark Side. Consisting of two separate layers (exterior Paris and the interior of Notre Dame) the map is extremely helpful not only in avoiding a lot of tedious wandering trying to get from point A to point B but also in giving the player a nudge as to where things still need to be accomplished. The hint feature not only helps with the hidden object scenes and mini-games (as a skip feature) but also helps out in the main adventuring sections of the game.

If there is anything to criticize about this game it is that it is a bit shorter than the original, which is a pity but not a fatal flaw. The amount of gameplay packed into this gem certainly makes up for any deficits, and the pretty, pretty graphics and animations are merely icing on the cake. The three modes of play (casual, advanced, and hardcore) guarantee a fun experience for a wide variety of skill levels and the lack of heavy violence and gore makes for a fun adventure the whole family can enjoy. Take a tour of one of the great architectural wonders of the world and have a grand old time with the gargoyles!