Please note that this game deals with suicide. Players who are sensitive to the subject matter should be aware.

Tap it Games and Artifex Mundi's hidden-object adventure 9 Clues: The Ward begins with a frantic phone call that brings you, a private investigator, and your partner, a guy who always looks like he suspected you farted and is disappointed in you for it, to remote, self-sufficient Mnemosyne Asylum. Only when you arrive, the director insists nobody has called for help... a statement that seems a little dubious when a body goes hurtling out a window right behind her mere moments later. The victim is Doctor Crow, a therapist, and notes on his body point to a slipping grasp on reality, as well as rambling indications of some vague sense of guilt. It quickly becomes apparently this old asylum has its share of skeletons in its closet, but the more you investigate, the more you begin to suffer strange... lapses. What's going on in Mnemosyne Asylum? What secrets are its staff and patients hiding? Who seriously hangs paintings like that on their walls? 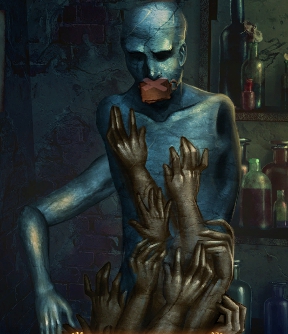 The great part about the gameplay is that almost all of it is structured in a relatively realistic way. Hidden-object scenes are full of items you'd expect to find in their locations, objects you pick up have logical uses, puzzles revolve around investigative work and deduction... it's a refreshing change from hidden-object adventures that take a much more random "everything and the kitchen sink" approach to their gameplay. The Ward's detective scenes are actually really clever, first requiring you to spot all the evidence in an area, and then assemble it in such a way that helps you figure out what exactly happened. Admittedly, some of these reconstructions feel a bit like pretty big leaps in deduction, at least as far as figuring out what would be pertinent and when it would happen, but it's still well executed and makes you feel like you're doing actual detective work. While the story is more than a little, uh, insane, and the villain is essentially a ripoff of DC's Scarecrow, The Ward is constantly introducing new characters, throwing out cutscenes, and having you talk to people in a way that makes its world actually feel dynamic and alive rather than just a stock series of scenes. It helps that it looks great too, utilizing the "moving artwork" aesthetic in a way that avoids looking creepy or weird and actually breathes personality into its characters, and the soundtrack is always perfectly suited to the atmosphere. A little more touch-and-go is the voice acting, which wavers between great, and, um, there depending on who's speaking.

Unfortunately, it's not perfect... while blessedly free of a lot of tedious backtracking, there are still times when The Ward is clearly padding its length with a lot of busywork, not to mention an instance or two where it just doesn't make sense. One hidden-object scene asks you to find a microscope, which turns out to be... a green square? A "kins" is a folded thing with a bow? Sure, game, whatever you say. The whole "asylum full of dangerous and funny lunatics" setting has also been done to death, but The Ward at least fleshes out its cast a bit towards the end in a way that gives them some unexpected depth and humanizes them. It's more "daytime soap" than it is Agatha Christie, but despite its bumps, 9 Clues: The Ward is still a remarkably well-executed mystery adventure with a ton of creepy charm. It's devoted to telling a story, and it does so extremely well, with a finale that's filled with tense scenes and big drama, as well as hinting at more to come. If you love cheesy thrillers and have been looking for a hidden-object adventure with style and camp to burn, 9 Clues: The Ward is a fantastic title well worth checking out and comes highly recommended.