868-HACK is an unusual sort of puzzle hacking game that feels a bit like an old school roguelike. Created by Michael Brough, author of Corrypt and Zaga-33, the game puts you in the happy shoes of a happy computer hacker bent on stealing precious data in the night. By swiping across grids filled with siphons, resources and enemies, you can walk away with all the data while setting an impressive score for your run. 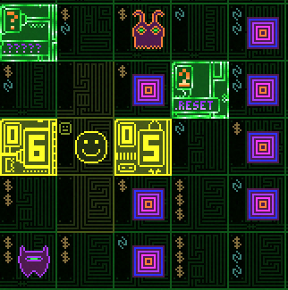 868-HACK is set up on a grid, with each square holding credits, energy, or prog blocks. Swipe the screen to move in a direction, shifting over one block at a time and moving the screen forward by one turn. Enemies spawn and give chase, but you can swipe towards them to give a quick binary blast of death. The goal is to siphon data from cells on the grid to pick up points, resources, and new abilities. Grab a siphon, tap it in the menu to activate it, and you'll automatically gather resources indicated on the tiles.

If you're adjacent to one of the progs when you siphon, the fun really begins. Prog blocks activate groups of enemies, the number of which is displayed on their face. They also give you new abilities and data, though, making them worth seeking out. Some of these powers are as simple as letting you move without the enemy seeing you, waiting one turn, or spying on prog cells that are hidden. Others let you destroy groups of enemies or heal yourself. They all cost resources to use, of course, so you have to strike an uneasy balance between sticking your neck out for more siphons and just staying alive to see another stage.

868-HACK makes a complex economy out of a few simple numbers. The grid is only 6x6, dangerous prog squares spawn just half a dozen or so enemies, and siphoning data rewards you with merely a handful of credits and energy. The catch is that when you tug at one string, the whole web moves. Gain some resources and enemies appear. Fight one foe and another one walks up behind you. Go for a prog block but end up surrounding yourself with bad guys. It's laughably easy to paint yourself in a corner, but once you get rolling, 868-HACK will quickly become your new favorite game. Especially once you start going for score streaks and survival runs!

NOTE: This game was played and reviewed on the ipad 3. Game was available in the North American market at the time of publication, but may not be available in other territories. Please see individual app market pages for purchasing info.

One of the best games I've played all year (and I keep playing it over and over again). If you like turn-based strategy games, this should be a no-brainer to purchase/download. It's extremely well-designed, well-balanced and with a smooth and stead difficulty curve.