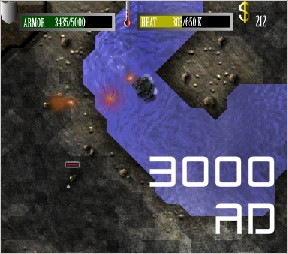 3000 AD, from Sloth Productions, is a mech-battle game shown from a top-down perspective. Control the movement of your walking war machine with [WASD], aim and fire with the mouse, fire your shoulder rockets with [space]. The pacing is much less arcade-oriented than Rock Solid Arcade's similar Robokill. 3000 AD is a more stomping, creaking affair, much like classic tales of tall machines like Mech Warrior. Here your steel chassis will absorb gunfire, and lots of it. Your job is to dish it out faster than you take it.

In between missions, you need to balance the weight of your armament with the power of your engine, if you don't want to be nearly immobile. You can hold [shift] to vent exhaust during play, which speeds you up significantly (also good for frying nearby infantry), but also superheats your core temperature. Keeping your cooling system upgraded lets you use both your venting and your weaponry more often.

The graphics are a curious combination of sophisticated and hideous. Marvel at all the fog, water, and explosion effects, even as you squint to understand what might be shooting at you. The initial effect of the extremely low resolution may put you off, but as I grew used to it, I felt that the style gave it a stately feeling. It's almost like a story of olden times, when pilots were bearded, pixels were gigantic, and mechs were huge and clunky, not like these modern mechs with their hyper-skates and their glitch-core bina-rave parties.

I couldn't get past the first 30 seconds. It's impossible to identify enemies against the terrain.

I found this game very fun, despite the graphics. In the end, I had the strongest equipment, all techs, all upgrades, and I was constantly overheating (I also forgot about the venting), yet I still beat it. I like these top down shooters: Robokill, ect.

Very fun, but overall, a bit short on strategy. The upgrading is a bit slapdash, as you get enough money early on to buy most upgrades pretty quickly, and skip straight to some of the later weapons, giving you a massive edge. The only particularly difficult part of the whole game is the last level.

I just noticed that you'll want to turn your AdBlock off before playing this.

[Edit: We've switched our links to a copy of the game on Kongregate, partly for this reason. It shouldn't be a problem now. -Psychotronic]

Alright, mechwarrior 3050, but much easier and lower rez than the old SNES. I wish they would remake Mechwarrior 3050 for the Xbox 360...

I cant seem to get past the first level. Am I supposed to cross the river? When I kill all the enemies and destroy the two buildings, if I try to cross the river it looks like theres a glitch with the sprite and the legs keep walking and the top of the mech stays on the opposite bank and I can't control anything anymore.

Ugh, I can hardly see whats going on. I really don't mind simple or retro graphics, but this is just plain awful. :/

The water is shallow (well, at least compared to how tall your mech is), so you can easily walk across it. In fact, standing in water gives you a major cooldown bonus, so if you stick to the wet places while boosting around and shooting, you'll have a big advantage over your enemies.

This game seems pretty easy so far (on level 4). A good set of LRMs and lasers with a gyro (to get your missiles on target faster) and sensor jammer (because enemy missiles hurt a lot!) will let you take out mechs and tanks in just 1 or 2 salvos. If you camp out in the water you can run exhaust and fire all of your weapons full speed, and it'll *still* take forever to overheat.

A bit too easy, missions usually finish with a "what, already?" feeling. It would have been nice to change the hull shape, e.g. start with a tank with just one turret and buy your way up to the megamech.

I'm usually a sucker for this overhead WASD/mouse shooters but in this game the designer got everything wrong - smudgy graphics, game balance, overall gameplay.. I couldn't stand playing it for more then a few levels.

Too bad - I really dig the overheating concept, upgrading your mech and so on, but the ugly execution with eyesore graphics is awful. And I really DON'T need great graphics in games, but being able to discern any object from the background is unforgiving.