Just in case seven killers wasn't enough for you, Todd Luke serves up 24killers in his funky yet simple puzzle game made for the 7 Day Roguelike Challenge. Seems someone in this monstrous gathering wants you dead, and everyone knows who but you. Move throughout the midst of them with the [arrow] keys, and use [Z] to switch between question and kill modes. Bump into someone to question them and they'll drop a clue as to who your stalker is, but be careful, as if you aren't in kill mode, brushing up against your would-be assailant will be instantly fatal. Don't worry if you turn the wrong person into a smear on the floor, though... this is a laid-back sort of place that will allow you to kill two innocent folks before taking action, which is a far cry from the last club I was at, tell you that much. I said I was sorry. 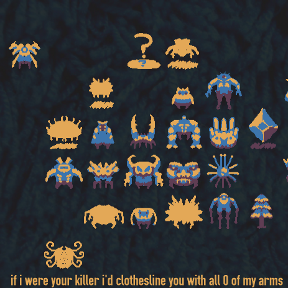 24killers is sort of what you'd get if Suda51 or maybe cactus had originally designed Guess Who and been completely delirious the whole time. Sam English's soundtrack is a perfect fit for the surreal imagery, making a decidedly unique atmosphere to go along with its strange concept. The downside is that replay value is essentially limited to how entertained you are by that same concept over and over, and the reward for finding your killer is the same as getting whacked yourself... press [R] to restart. It's a clever idea that feels like it needed a bit more to make it as substantially impressive as the monsters partying it up inside, but one with such a unique style that we'd love to see it expanded upon in the future.

I was getting incredibly frustrated by the movement (lack of) patterns for the monsters. I spent a while trapped on one side of the screen, having questioned everybody who was accessible, waiting for the few blocking the edges to let me past. Then, once I figured out who the killer was, it took several minutes of stepping back and forth, until finally a pathway to it opened.
There really needs to be a third mode allowing you to either pass through the monsters, or push them.

Not as bad as the 2.6 rating might suggest, in my opinion. The monsters could be clearer. I died twice before I got the right guy.

Wait, how is a crab cuddly?

"[the dialogue box opens, but only 56k modem sounds play out]"
NIIIICE hint!

I don't understand how to ask them questions? They just glow and make a weird noise. I can't find any pattern in their sounds or movements. This makes no sense to ma at all.