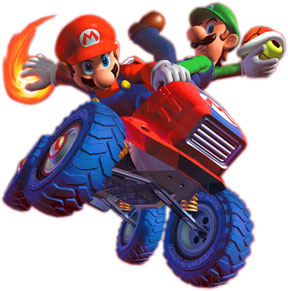 Anyone who knows how particular I am about game quality will not be surprised to learn: I have been playing a lot of Mario Kart lately. Nintendo knows quality like Blizzard knows quality, and like few others in the games industry seem to understand. And what I mean by "quality" is that when you see it, and when you play it, the game reeks of high production values and rich gameplay mechanics. And Mario Kart: Double Dash!! does not disappoint in either department. There are tons of different characters and karts to mix and match and choose from, tons of rich and diverse tracks to race on, tons of different items to wield and a steep level of difficulty curve as you advance throughout the game. Which means, you won't soon play through this rich and wonderful game: it will gnaw and nag at you to come back and give it another shot.

In my humble opinion (IMHO), me thinks the game critics out there doth complain too much, as MKDD!! has been given a slightly bad rap since it had an enormous expectations list to live up to. Each iteration in the Mario Kart series has excelled and impressed and, above all, entertained the masses for years, and I believe it was impossible for this iteration to live up to the hype. But Mario Kart Double Dash!! delivers what every Mario Kart has before: quality through and through and then some... LAN support! And with the Warp Pipe project well underway, soon you'll be able to play MKDD!! over the Internet with a broadband adapter and a PC running the Warp Pipe software.

I love this game, and I can't wait for Thursday festivities to roll around so I can race my nieces with some genuine Mario Kart multiplayer shenanigans! Rating: A.

Over at Gamespot this evening is one of the best analyses I've read to date regarding Nintendo and the difficult road ahead facing off against Sony and Microsoft.

I am actually very excited about what the future has in store: with so much at stake and with so much cash backing each of the big-three console makers, the next round promises to be a no-holds-barred fight to the finish. Among the arsenals will be some truly spectacular innovative products as well as some of the best game software ever released.

The obvious winner will be the gamer. =)

First off, I'd like to congratulate you on shipping your latest game, "Manhunt", to critical acclaim. It is beyond a doubt an achievement of highest praise that a group of talented artists, developers and game innovators, such as yourselves, have collaborated on such a ground-breaking title.

As technology innovators, you have the enviable role of introducing to the world new and exciting technologies, gameplay mechanics and situations. As game industry professionals, you also represent the thousands of other game developers who, like you, are passionate about the games they create and are proud of their contributions to the industry as a whole.

There is no question in my mind that your latest game will be a phenomenal financial success, especially in light of the extreme violence that is portrayed in the game: Gamespot's Greg Kasavin, in a review of the game, writes: "The game unflinchingly depicts intense graphic violence, the likes of which you might expect from a slasher movie but not from your PlayStation 2." And although the game is awarded the Adults Only (AO) rating by the Entertainment Software Rating Board (ESRB), the successes of your previous titles suggest there will be far more than just adults who will be playing your game.