The National Institute on Media and the Family this week released their top 10 recommended PC and video games:

...as well as their top 10 games parents should watch out for:

I never thought there would ever come a time when I would find too many good games available to buy them all. Well, unless you just crawled out from under a rock, the proverbial hell has just frozen over: games for every platform oozing from every game orifice imaginable. And just because you're probably thinking: "hey jay, there's a special someone in my life who just loves games, which ones would you suggest I get for them for this holiday season?" ...I'm here to make a few recommendations: 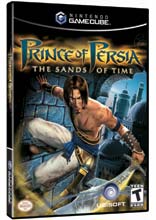 First up, available on every major gaming platform, there's UbiSoft's Prince of Persia: The Sands of Time. The game looks magnificent, and from what I've read it will be a likely contender for Game of the Year. Be sure to pick up this one early, or you might not find it when it comes time for your last minute shopping excursion on Christmas Eve.

UbiSoft scores another instant hit with Beyond Good and Evil for all major platforms. The stylish action-adventure is very Zelda-like though stands on its own merits. It looks fantastic and has been very well received, I'm seriously looking forward to this game.

Just released for the PC and XBox, Ion Storm's Deus Ex: Invisible War has been received to critical acclaim due to its exemplary design and moody sci-fi experience. Game industry luminary Warren Spector's last game, Deus Ex (2000), enjoyed much praise and won many game of the year awards. He's back again with this latest installment.

For the platformer aficionado in your life there is Naught Dog's Jak II and Sony's Ratchet and Clank: Going Commando, both highly rated sequels surpassing the merits of their highly rated predecessors. I really enjoyed the originals of both games and I am looking forward to playing the sequels. And both exclusively for the PS2.

Capcom's Viewtiful Joe is simply amazing. I've been playing this game since it was released in October and cannot recommend this game more highly. Mentioned previously here, the game is stylish and the gameplay is phenomenal. Don't think, buy it... now. Only for Gamecube.

And don't forget Nintendo's latest masterpiece Mario Kart: Double Dash!! The game, previously written about here, is a guaranteed hit with anyone with a Gamecube. You can't lose by picking this one up, 'nuff said.

And for that blood-thirsty serial killer in your life, Rockstar North's Manhunt is the game to get. Boasting reviews like: "(Manhunt) unflinchingly depicts intense graphic violence" and "the most appalling scenes of violence ever crafted for a videogame" ...how can you go wrong with a game like that? =P