Ding! 47th floor. Now it's time to solve another puzzle that'll grant you access to the elevator car once again. Such is the progression through 100 Floors, a somewhat familiar escape puzzler by Tobi Apps Limited. 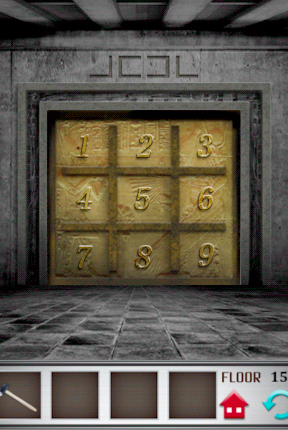 The core concept of 100 Floors is simple. On each floor you're presented with a single screen containing an elevator door that you've got to figure out how to open. Tap, swipe, pinch, and do other things that your mobile device is capable of doing until finally the level is clear. If you pick up something, tap it in your inventory, then on the screen to use it. If you're getting frustrated, you can also tap the red "home" button to return to the main menu, or the blue "reset" button to restart the level.

"Wait a minute," I hear you exclaim. "Isn't this just DOOORS with an elevator and a bunch of new levels?" To which I reply, "Yes. Why, is there something wrong with that?" And there isn't. DOOORS had a good formula, and 100 Floors doesn't ruin it. Some of the puzzles lack polish—such as one where you have to be really good at tapping the screen rapid-fire—but they are creative and make good use of the device's capabilities. Plus, it's hard not to feel like a genius after cracking a particularly puzzling level.

100 Floors is a free app and is available for both iOS and Android devices. The team at Tobi Apps Limited is still adding puzzles to the game, but at the time of writing, the Android version features 70 floors, while the iOS version has 90. So go ahead and give it a try. I'll see you at the top floor!

100 Floors Walkthrough
(Note: This walkthrough is based on the iOS version. Although it assumes you are playing on an iPhone, you may substitute your own device as needed. This walkthrough will be updated as new floors are added.)

100 Floors Walkthrough
(Note: This walkthrough is based on the iOS version. Although it assumes you are playing on an iPhone, you may substitute your own device as needed. This walkthrough will be updated as new floors are added.)

I enjoyed this game pretty well up until level 84, which I don't think is actually possible to beat. I know *how* to do it, but it feels like the hotspots for the buttons you have to press simultaneously and repeatedly are maybe 1 pixel big. I've tried over and over and over and I hate the game now.

I'm currently having a pretty miserable time on level 55. It seems to consist on me tipping my iPad to the side for a ridiculously long time, the Tertris pieces flying across the screen for two seconds, and me unsucessfully tipping the iPad in other directions trying to make them reappear.

@Heddo: Trust me, it's doable. I've done it multiple times. The timing's a little tight, but just keep at it.

@GamerDemon: Try tilting your device more gently. That's all the advice I can give.

I have to agree that the button hot spots on 84 seem way to small. Especially for a phone screen. I am just not that coordinated. Almost to the point of trying to rig something with 'touch' glove tips and a popsicle stick :p

100 Floors has been updated with more floors! I have updated the walkthrough accordingly.

I'm having the same problem on level 55, on an iPod. About how long should I wait before trying to tilt the thing in a different direction?

After finding a video walkthrough, I figured out how 55 works.

Start with the device perfectly flat. I set mine on the desk. Then, tilt it very slightly left. This will bring the pieces into view. Continue tilting slowly to move them into place. If you lose track of them, it may be easier to reset.