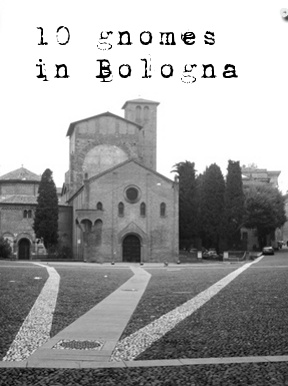 You know how people say you can never go gnome again? Well, those people are liars. Despite apparently ending some time ago, everyone's favourite point-and-click series about finding tiny bearded dudes is back proving that, once again, there's no place like gnome. It's Mateusz Skutnik's 10 Gnomes in Bologna.

As before (and before eleven other times), your goal is to track down ten miniature gnomes hidden throughout a series of photographs of an area. Cruise your mouse around the scenery looking for hotspots; if your cursor changes to an arrow, you can click to change perspectives or move to a different area. The gnomes are hidden everywhere in the tiniest of places, so make sure you're methodical in your searching. You've got ten minutes, after which the gnomes presumably turn into pumpkins or something, so click fast or the game will end. We can't let the gnomes win this one, people! Not after we've come so far!

Gnome Bologna, as I've decided to shorten the title to because it sounds both delicious and terrifying, is a snack-sized bit of a game. The formula remains basically unchanged from previous installments, which is either a good thing if you loved them, or a point against it if you were hoping to see some new twist implemented. Which, after twelve games, might not have been a bad idea. If you like Mateusz's brand of mellow hunting and lovely scenery, 10 Gnomes in Bologna is a welcome addition to your day. Still, I can't help but wish there was a bit more to it than looking out for hotspots placed at odd angles. Which is. Um. The, uh... gnome... that... is... um... the gnome... Aw, fishpickles, I'm all out of puns! Guess I have to retire now.

found five gnomes and a troll... now, where do the other ones may be?

[Fixed your angle brackets. Please us &lt; and &gt; instead of just typing angle brackets in your comments since angle brackets have special meaning to HTML that designate the begin or end of an HTML tag. Thank you! -Jay]

I'm from Italy and I love all mskutnik's games and I so happy to see some gnomes in Bologna! Thanks! :D

I have never been able to find all 10 gnomes in these games....
I did find six gnomes and a troll. (:

If nothing else this was a great distraction from writing my research paper! ;P

I did better than I expected: 9 gnomes and a troll.

Has anybody found all 10 yet, who wouldn't mind sharing information? I'm sitting at 9 and a troll, and it's driving me crazy.

1 left of the church in the wall

1 in front of the church by the ball

1 in the scooters down an alley

1 beneath a cafe in a grate

1 in a pillar to the left of the start

1 in a crack by a fake door

And a troll right of the Church door

Third pillar right of the alley with the scooters, behind the ring.

I like this game but I hate the time limit and having to start all over again. and the navigation could be better.

I kinda love the fact that someone has gone out there (bologna in this case) and taken upclose photos of crevices and drains and flowerpots and stuff. heh

The link "series" links to the 'tengomes' tag rather than the 'tengnomes' tag as I expect it should.