Such an easy concept, but such a challenging game. Zyl is a one button arcade release from DevilishGames (whose work you might recognize from Cube Droid Saves the Galaxy) that's all about patience and timing. It looks so calm and peaceful on the surface, but once the game gets going, you'll quickly realize it's in your best interest to leave nervous anticipation in the other room. 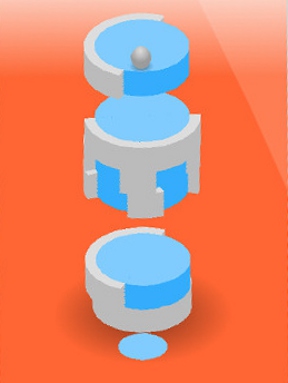 Here's the scoop: your job is to drop the marble from the top of the cylinder to the landing spot below without hitting the walls. Orbiting the blue core are jagged gray walls whose gaps occasionally align to create a clear path. All you have to do is watch the walls' movements and tap the screen as soon as you can make the leap. It's that simple. Finding that perfect moment will take some careful observation and lots of patience, though, so don't jump the gun.

Zyl avoids the temptation of adding weird gimmicks or distractions from its distilled essence, providing you a clean and clear game of reflexes that gradually gets more challenging over the 60+ levels. It's a free download for both Android and iOS devices, which includes the first ten stages with the rest unlockable with a single, minimal in-app purchase. It's easy to play, it's strangely relaxing, and it looks great. What more can you ask for from a mobile game?