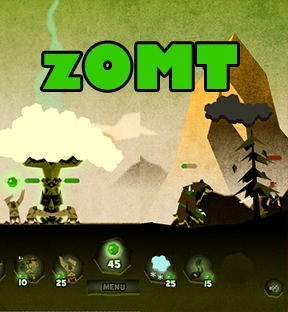 Being a god is awesome! Worshiped by multitudes, unlimited powers, able to just reach out and smite someone anytime you like, right? Well, in the new Preloaded game for Adult Swim UK, zOMT, you indeed get to be a god! But your number of believers tops out at six. Okay but still, awesome powers right? Well, yes, but you have to wait for them to be unlocked, and also they take some time to reload, and you need to wait for your believers to offer up some green gems in order to use them at all. Okay but... still, instant smiting, right? No one beyond your mighty arm? Well, actually your godly power is limited to that torch-thing over yonder. And the waves of enemies come from beyond that. So... yeah. If you were looking for a game that gives you a taste of omnipotence, zOMT leaves something to be desired. But as a defense game, it's a great deal of fun.

You start out with at least one worshiper on each level. Enemies will approach and attempt to kill them, and if they all die, it's game over. The believers may seem rather helpless because all they do is bow and scrape before you, and won't fight back against any enemies. However, every so often a believer gives off a little green gem which wafts up from them. Clicking on these gems gives you points which you can spend on summons to defend your believers, everything from a suicide bomber to a rampaging bear to the intriguing "bouncy cloud", which can be drawn in the sky by clicking and dragging and used to bounce projectiles away from yourself, and if you're skilled with trajectories, even to bounce back at the enemies. You can use either the left and right [arrow] keys or [A] and [D] to scroll back and forth, and you can return to the center at any time instantly by hitting up arrow or [W]. You beat the level by destroying all the enemies. Enemies also release green gems as they die, for a quick pick-me-up.

As you get further up, you have to deal with enemies coming from both left and right, and your believers are quite fragile, so keeping the enemies at bay can become frantic. The most difficult aspect to master is the use of bouncy clouds. Using them to defend your believers is simple enough, but getting the angle right so as to strike back at whatever is hitting you can be very difficult, because you can't see the entire field at once. Another tricky piece to use is the suicide bomber, because while you're using him you can't click to pick up any gems on the way (since clicking causes him to explode). Since gems disappear after floating up to a certain distance, it's possible to lose out on needed points this way. It might have been better to assign the suicide bomber a key instead, so that the player could have continued to click and pick up gems while deploying him.

I really enjoyed zOMT's great flat paper-puppet aesthetic and sense of humor. Being told that my godly might was at the level of "holy toast" was certainly a spur to keep playing. Conquer all fifteen levels and your power will be unquestioned! At least from here to that torch-thing.

Great game except (so far) I have two complaints

I find I'm spending most of my time collecting mana, and not enough time on defense. Make mana collectible by passing the mouse over the bubbles, rather than requiring the player to click on each bubble.

Also, I support the motion for hotkeys.

What sort of hotkeys would you guys like me to add?

We have WASD and the arrow keys at present.
We tried rolling over for the mana but it wasn't particularly satisfying.

Thanks for the review
Liam

Love the game...highly addictive. Stuck at the end of level 9 though, with a bad guy stuck under a snowcloud and no other enemies left, how do i finish?!

As others have noted, this is a brilliant game except for the lack of hotkeys and the game-killing frustration of mana clicking. So, here are my notes to the developer:

1) Although I don't find it necessary, some people may prefer to use hotkeys (number keys, for example) for the defense objects. WASD and direction keys are direction controls, not hotkeys.

2) Being forced to click on resources to collect them is a game-killer in defense games, because it distracts from the placement of defenses, especially when fast, precision placement is necessary for survival, as is the case in higher levels of zOMT.

While automatic resource collection is standard in most real-time defense games (at least, the playable ones), I think mouseover collection would be better for zOMT. Not only would it be a huge improvement, but it's the only way to make this frustrating game playable. When you say rolling over the mana "wasn't particularly satisfying", I think what you really mean is "we couldn't get it to work." Because, seriously. Have you tried playing level 8? Game-killing frustration. Rage-quit. Which is a real shame, because this is truly a brilliant game.