If you're an action RPG fan and you love zombies, Ant Karlov's latest installment in the hit Zombotron series is proof that the universe loves you and wants you to be happy. In Zombotron 2: Time Machine, your escape from this undead-ridden planet is foiled by your ship's lack of fuel, so you have no other choice but to pick up your gun and head back into the depths until you find some. Should be easy, right? But you should know by now that nothing in the Zombotron universe is that simple, and you'll have to jump through more than a few hoops if you want to get home... and even do a favour or two. 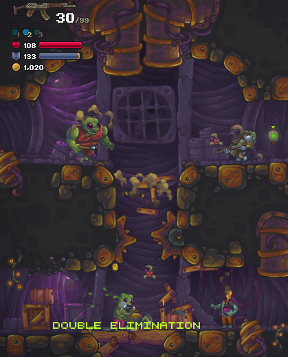 As before, [WASD] moves and jumps while the mouse aims and shoots, and hitting [R] reloads your current weapon while [E] interacts with doors and switches. If you haven't played any of the Zombotron games, you might be wondering what sets this series about from the zombie shooters everyone and their dog is coding these days, and the answer is simply variety. And also fun. See, with tons of physics objects in the world to play with, most set up with care and design to allow you to play around, you've also got tons of ways to deal with the zombies that come after you. Crush them by luring them beneath crates. Push trolleys of explosives around to leave deadly traps you can trigger with a bullet. Blast the wooden platforms beneath them away to drop them down onto their own kind. Throw in some Metroidvania-esque permanent stat upgrades hidden throughout the game, the ability to buy and upgrade ammo and equipment, and you have an absolute winner.

Zombotron 2: Time Machine isn't largely different from its predecessor, right now to the cludgy controls. It looks and plays exactly the same, but somehow still manages to feel more ambitious. Right away, stages are bigger and more complex, with a lot more going on in them and even more treasure to find. The bigger focus on story this time is a bit of a surprise, though the stiff dialogue at times fails to make much sense. But does that detract from the experience? Not really. Zombotron 2: Time Machine is still an absolute blast, and the more elaborate levels will have you roaming through every nook and cranny searching for upgrades. Add in some new characters and enemies and even a few big machines, and it's the perfect way to spend your free time.

This game is intense!

Ok, FINE! I didn't want to get anything done today anyways.

I love love this game but the controls are very jerky and it would have been nice to use the down key instead of the E key. Saying that its so fun to play and waste time with. Will be playing this over and over I hope the control keys will not stay a issue how else will I keep my money if I keep dyeing because I cannot get out of the way or just don't move at all. Is this a issue for anyone else ?

You lose all your money when you die, apparently.

I am stuck in a corridor underneath the 'house' and cannot move - controls are not working.

This is one of my favorite games. Love the physics. I really wish there were a way to adjust the quality; my computer is old, and this one just gets too laggy for me to play. Can't hold that against the game, though.

Been playing this on and off today and the controls are just making it a nightmare .. Its like I have no control over them its getting to the point that I may have to give up until its fixed.Its really to bad because I really like playing this game.

"You know what people really like? Escort missions. Let's put a bunch of them in a Flash game."

I don't get game designers sometimes. It's like they don't play games.

Other than that and the occasional super gravity that apparently kicks to cancel every third jump attempt, it's great fun.

I haven't experienced anything like what you're describing Alice. Sorry. The game plays smoothly for me. :(

I tried it again today and get the same glitch. When he is walking its like he stops moving and then he is the other side of the of the game screen being killed .. I will try on another comp and see if it still happens....

Just finished the game and really enjoyed it. I love the complexity: five factions of enemies that all fight each other, complex, destructible environment, secrets, puzzles, story with some mystery. The action, graphics, sound, and physics are all great.

I would really prefer to have a level start over when you die rather than just respawn nearby minus a bit of cash. Except for the pod transport level you can pretty much zerg any level and be confident of getting through it pretty quick. It takes away a lot of the challenge.

i really liked this game but i thought it was kind of long because the levels are long and there's many levels i mean dont get me wrong, i like long games but i think this was a bit too long

Sooooooo I tried the game on another laptop and it worked just fine . So it was hella fun and no glitches as I had stated before.

You can easily redefine the keys when you click on the ? in the start-menu.

I got stuck at the part under the first terminal, with the door.

I figured it out

1,002 Views
0 Comments
jayisgames.com— The popularity of e-sport tournaments is growing rapidly around the world. According to agencies and Newzoo , the viewership of such competitions already exceeds 450 million people, the market is estimated at a billion dollars with an increase of about...  ...