Best described as "Kingdom Rush, but in a tower, and with zombies", Firebeast's Zombo Buster is a tower defense game where you're summoning in soldiers to defend elevators from an incoming zombie horde, but you have to pay them first. Basically, just pretend you're in Land of the Dead and you're trying to protect Dennis Hopper because you don't know any better. During each stage, enemies will begin to flood in from the right side of the screen, and you have to click the walkie-talkies to call in any soldiers you can afford to hold them off. The cost of different soldiers vary, as does their strengths and weaknesses, and if you've got the coin, you can even upgrade them to make them more powerful. 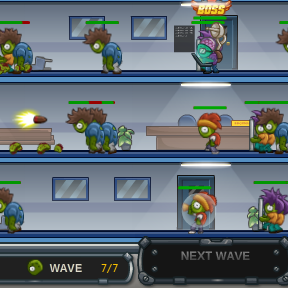 Initially, all you have is one elevator where your soldiers will appear that you have to swap back and forth between different floors to manage each wave of zombies, but you can spend cash to unlock new elevators to place soldiers in as well. Which makes no sense. Because how are zombies getting on higher floors if you have the only elevator access? If they're already up there, then what's the point in defending the lower levels? Haven't we already lost? Who are we paying for use of new elevators, and isn't it in their best interest to give them to us for free? CURSE YOU DENNIS HOPPER! Just make sure to hold the line... how many zombies get through influences the number of gems you receive, which are spent on permanent upgrades to classes between levels. You can also earn gems for completing certain achievements.

Zombo Buster has a lot of things going for it. It manages to make the apocalypse adorable, it has a wide variety of enemies with unique abilities, and the multiple soldier tiers with special attacks and strengths allow for a satisfying bit of depth to its strategy. Getting to those tiers is another matter entirely, however, since Zombo Buster's dedication to presenting the classic overwhelming sea of zombie attackers means after the first level or two the difficulty spikes enormously simply because of how many zombies begin swarming you. Since there are a limited number of gems, you can't grind for upgrades, and when the game begins vomiting literally dozens of specially powered undead at you on each floor it quickly turns into the sort of challenge not every player will appreciate. It feels like there's one specific strategy for each stage you're just supposed to figure out, as opposed to being able to develop your own. As a result, Zombo Buster is a game that some players will find quite good, but were it no so punishing, a lot of players could have found great.

Yay carnage. Boo easy. I basically hammered them all back, and kept upgrading. (Pay attention to the weaknesses... which all seem to be the same one.)

Kind of an unacceptable bug...

in the late, late levels when I super-click on the "spell", it will break � and then kill the dude anyway. Extremely frustrating. Not to mention it's timed way too quickly, and also results in auto-choosing the next soldier up at random because Flash catches up with all those clicks.

It's sad that the first thing I thought of upon seeing the title was Zombo.com, where you can do anything.

Easy? I played it last week and couldn't get past the 3rd stage. Couldn't kill the zombies quick enough at all because I didn't make enough money to get the 2nd elevator and troops for it while being able to significantly upgrade my existing troops (much less the new ones). And because its persistent upgrade system is one of those annoying ones where you have a limited number of upgrades you can earn per stage I couldn't try grinding for more upgrades to try and remedy the situation that way.

Well, I found it easy... you can switch elevators. Just switch to your stronger team, and you'll have no trouble with the early levels. They'll hold them off till you get enough money.

I'm not really sure how helpful that is without knowing how we played differently. Uh... I started with full elevators? I dunno, I'm usually lost when there's a specific strategy path, and mostly I ended up bludgeoning the early- to mid-levels.

I was able to upgrade after every single level.

Anyone know how to get the mystery badges?