The end of the world comes not with a bang, but with a hex-based strategy board game in Space Games' Zombie Tactics, where it turns out the local prison has been conducting illegal experiments on its population in pursuit of eternal life. Do you want zombies? Because that's how you get zombies. The game is turn-based, and each of your characters can move around the map and attack enemies or support one another. Actions, including movement, take stamina, which regenerates slowly each turn, or more significantly if you choose to have a character "rest" instead of act. Killing zombies nets you not only experience, granting you skill points for each character and their abilities when you level up, but cash that can be spent on buying new items or upgrading the ones you have. Items can be equipped by any character and can bestow bonuses like increased evasion or health, or even passive abilities. After a while, you'll have the option to send party members off to scavenge... they won't take part in the next battle, but they'll return after it with coins or items. Initially the only party members you'll have are the Hunter, the Lumberjack, and the Nurse, but more will come to join your group. Of course, the same is true for the zombie forces, so you can expect to fight stronger, more varied foes as the game goes on. 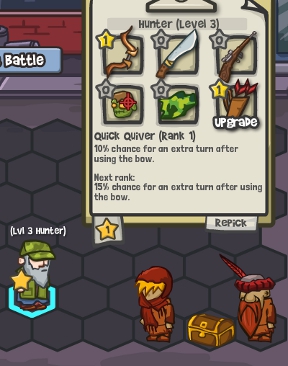 I've always felt the apocalypse is best approached with a sense of humour, and Zombie Tactics definitely has that. Despite repetition brought on by lengthy levels that throw the same enemies at you for too long before introducing other types, its simple control scheme and roster of helpful, well thought out character classes makes it fun to play and easy to pick up regardless of your familiarity with the genre. The items are also helpful, with the ability to upgrade them to make them more useful or swap them around your party to balance out weaker characters a nice touch. It still feels like its beefy host of levels with their essentially identical progression could have used something a bit more, such as civilians to rescue for a bonus, or destructible scenery you could use to your advantage, but if what you want is a strategy game that's just deep enough to keep you engaged without requiring you to haul out a manual every other turn, Zombie Tactics is a colourful, surprisingly cheerful game about unethical prison practices that's well worth your time.

The link to play has "No such file or directory" PHP errors currently.

May need a hexagon tag on these, so we can play them all. Yay not-humans!

It has nothing to do with the game but I wondered why Zombies are sooo popular in games, TV series, movies etc.?

Today it's dense urban populations contributing to a horror of unthinking masses of gluttonous murdering humanity. When I was born, the world population was around 4½ billion. (I'm not over 100 years old. Heh.) Today it's over 7 billion.

Back in the days of yore, it was more about the fear of the undead, as the mortality rate meant more families took care of death by themselves. The pestilent undead tended to individuals like vampires and werewolves 'cause Death was kind of scarier at the time. Pre-Black Plague world population was 0.45 billion; after it was around 0.35 billion. That's 100 million people removed from 450 million total in 10 years, and populations would not recover for about 150 years.

There would not be 1 billion living people in the world until the 1800s.

I am none too comfortable with the only female character not only lacking any meaningful combat skills (not even poisons?), but what happens after the end-game. And the zombie genre isn't an excuse, there are plenty of female protagonists in the non-loner zombie games.

And there isn't even one transgendered character! How incredibly insensitive of the designer to not use this cute little zombie cartoon game as a platform to break down gender based societal stereotypes. I for one am just incensed!

As an actual transgendered person, I don't find your glib dismissal of the idea very funny.

Please ensure that the discussion here remains civil and intelligent. People are more than entitled to express their opinions on ANY game as long as they do so in a thoughtful, constructive fashion, and if a dissenting viewpoint can't be presented in a similar fashion, it should be kept to oneself. Nothing says we all have to agree with one another, or with the game, but nothing is gained if we can't all listen to and talk to one another like adults. :)

Dora, you are absolutely right. I for one am very confused why someone would drop a random reference to trans people into a game about zombies that does not mention them. Good for you for keeping this thread clean and on-topic.

Jeff, the zombie theme allows the creativeness of the one doing the story background to be a zombie. No brains needed. You put in stuff, no need for much creative plot and you got to kill a setting where you can kill other humans without any moral discussions about it.

Actually there is likely way more to that, like being an allegory to modern life style, etc. Nut I suppose the one main motives is and stays, its cheap shortcut to make lots of gore without guilt or story.

PS: Cutty, I think your mark is way out of line. Nobody asked everything to break down, but seriously its kind of tireing to see them constantly reenacted and strenghed due to using old sterotypes.

Aside from the needlessly messy merchant/stash system, I'm quite enjoying this game.

For those who don't feel like playing all the paths to this game, here are the four endings:
Path 1

Did not trust the scientist:
"Only the dead have seen the end of war." -Plato
(Each of these four paths ends with some dialog and a quote after you make the final choice, but this was the only one that allows you to play a little while longer before your team eventually succumbs to the virus.)

Trusted the scientist, destroyed the vaccine, spared the scientist:
"Live your life as though your every act were to become a universal law." -Immanuel Kant

Trusted the scientist, consumed the vaccine:
"There is a saying in Tibetan, 'Tragedy should be utilized as a source of strength.' No matter what sort of difficulties, how painful experience is, if we lose our hope, that's our real disaster." -Dalai Lama XIV