There ain't no rest for the dead, but don't think Detective Margh minds. Not when there are cases to solve. This interactive visual comic by LuDigiTales, Zombie Society #1, will have you scratching at your exposed skull to help solve its mystery. Follow detective Margh around with his sidekick, Ghvnn while they investigate a mystery that goes deeper than it first appears. Make choices for Margh as the story advances and enjoy the humorous, occasionally campy, and yet curious start of an intriguing tale. And while the choices you make in part #1 don't seem to alter the story much, LuDigiTales has ensured that these seemingly minor options will impact the plot in a much larger way later on down the road. 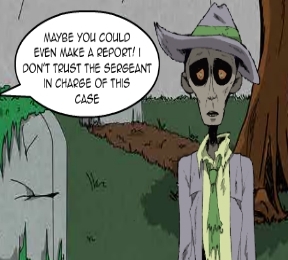 While holding the current theme most of the games have nowadays, Zombie Society #1 takes it down a different path. If you couldn't tell by the names, you're following the zombie side of the zombie apocalypse and while I don't want to spoil the plot, I'll hint that a main part of the mystery involves the still breathing kind of bodies. It's a bit of a mind melting difference after you've played interactive novels like, The Sagittarian, as you suddenly are now playing for the other team... the decaying brain-eating team. However, the characters are fleshed out well enough (no pun intended) that they are charming and lovable in their own gory way, and you're not going to mind helping the undead along on their quest. The first installment of this growing tale is on the shorter side, it will probably take about ten to fifteen minutes to play through, but you're sure to enjoy the jokes as well as the wonderful artwork and involving plot. So turn your speakers up, sit back and enjoy the story time.

I'm not exactly sure what a "successful" playthrough of this game consists of.

It'd be nice if it gave you some clues as to whether your performance was good or bad.

I finally impressed the commissioner though!

I tried to play this game (Chrome browser, Windows 7) and I can see and hear the starting 'comic' panels, where the zombie arm comes out of the grave to an alarm clock noise.
But then the screen turns grey and never changes to the next scene.

Which is a shame, because it sounded rather interesting.

Sorry you're having issues! I tried the game on the same setup and didn't have any problems. Please try clearing your cache, make sure your browser and flash player are updated, and disable any adblockers.

Ah yes, either clearing the cache or just trying to play on a different day worked for me.

I think the only wrong choice I made was

not getting the police to look at the Lurr crime scene, because I remember there was something about not trusting the Commissioner.

Of course, the Commissioner ends up being the one you talk to later, so I probably should have gotten the police involved.

And like the first commenter, it's difficult to tell whether you have had a "successful" play-through, though I did see a "Successful Interrogation" medal appear in the corner. Usually I get those medals for stupid things, like dying the most times.

I enjoyed this and I'm looking forward to more, but I am perplexed as to how my choices now are likely to impact the story down the line. Are we relying on cookies/cache for player continuity? I feel like I'm missing something here.

I have a feeling that you're not supposed to know which choices were the "right" ones, just as the character doesn't know what his decisions have changed. It makes you play to your own decisions and not 'oh I didn't succeed so I'll chose the other option'. But I'm not too sure how it will work out with the later episodes. I guess we'll just have to find out. =)

5,063 Views
0 Comments
chrpa— Jayisgames needs your help to continue providing quality content. Click for details Welcome to Weekday Puzzle! We start with bitmagine Studio's platformer. Your goal is to help a blob whose partner got imprisoned in a cage. There is a...  ...

6,151 Views
5 Comments
chrpa— Jayisgames needs your help to continue providing quality content. Click for details Hi, it's Wednesday again and new Weekday Escape here! With Selfdefiant you get to Delaware and Florida for a short visit. The name of Amajeto's game clearly...  ...