The end to the mysteries of Zombie Society is finally here. With the last adventure being filled with a crazy theory from a mad man- er zombie, a list of suspicious names, and Detective Margh struggling to decide who to trust, we are all excited for this grand finale. Franceso Del'anna Muja's interactive comic Zombie Society - Death After Death 3/3 comes to a close, but there are still choices to be made that will change the ending and write a slightly different story just for you. It is really recommended you play the first two parts (found here and here respectively) for even if you don't have an ID account to save your actions from one game to the next, you can have the clues and the people fresh in your mind. While it does have a few moments of some pretty heavy stuff it still has its cheesy humor and lighthearted approach to the zombie world that will have you quietly chuckling to yourself. The episodes aren't very long so anyone can still try out this humorous yet peculiar story. 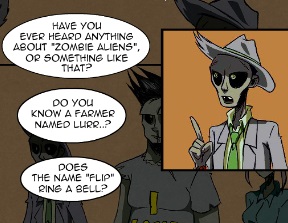 In this final part of Zombie Society - Death after Death, you're finally able to see how your choices will change the story, but you'll need an ID account for the game to remember what you picked across the whole series. You can still play with the defaulted choices, if you choose not to create an account, but there is something empowering when you know you made the decisions. That being said there are only three endings to the game (plus a secret one), and it may be that you can still get all endings even with the preset choices. But you'll be able to enjoy the ending more if you have found all the clues in the previous games. Otherwise, the ending feels as if it came out of the left field. However, when you see the buildup and all the hints to the conclusion it's a much more interesting finale. That being said, this conclusion feels a bit ... rushed. Even the artwork isn't as clean as it was in the other games. But though the story feels a bit shortened because of this it's still a great piece of mystery fiction. We will all be hoping that this is not the end of the stories within this crazy world and that this won't be the last time we see our favorite undead detective.

In case you don't want to play through to get all the endings, this is the ending I got.

I forget all the choices I made, but I didn't find a clue in one of the earlier chapters (or maybe it was set to default, I don't know).

The commissioner was 'recruiting' zombies for a space program, because the more zombies and fewer humans meant less food etc.

I, detective, went to space with the girl I had a crush on. I visited the space place once Grrhvn (or whatever the bulky sidekick guy's name is) decided to leave me. Once they told me about their plan and asked me for a decision, I said that my opinion didn't matter.

Then sweet talked the girl with some BS about how it would be selfish for me to say no to her wants, and I just want to be wherever she is, blah blah.

Talked to some head guy and his family who were pretend zombies.

Learned about the 3 types of people left in the world, and how wearing flowers around the neck apparently covers up that juicy juicy human brain smell.
Somebodyorother, a rebel human wearing flowers, was the person behind the 'brain drain'. For reasons. I think miss girl crush was part of his rebel forces before she died?

That wasn't particularly helpful since I'm terrible at names, but you get the idea.

Personally in my opinion,

Launching a bunch of zombies into space is a terrible idea. Like all those stories about how populating Mars/whatever with humans isn't going to fix environmental and/or overpopulation issues, with zombies it would be even less so. How long would it take before the zombies overrun the new planet?

The only zombie story I've ever see 'fix' the problem of what happens years and decades later when the zombies have won was the book, "The Girl With All The Gifts". In that book,

people are turned into zombies because of a fungus (I'd like to imagine it's a cordyceps fungus, because those actually turn ants etc. into "zombies").

They find children who have a more "normal" brain compared to most drooling zombies, whilst still being infected with the fungus.

One of these intelligent zombie girls is the protagonist to the story, and with her (human) teacher she discovers

that somehow zombies stuck in "blah" mode (whatever you call the drooling, shuffling zombie) were actually mating, and their offspring were the ones who were higher functioning.

The only way to save the world and move past the zombie vs humans stage was for the little girl to set off the fungus trees growing from corpses so that EVERYONE gets zombified at the same time, and the new generation could emerge.
After making sure her teacher was sealed up in a fungus-free breathing apparatus thing, so she could teach the new kids how to be smart.

Rant and a half, yes.

That book you mentioned reminds me of 'The Last of Us', maybe even the inspiration?

the plan isn't to help zombies; it's too get them off the earth so brains can take over! that's why mr fake zombie wants that plan

Late to reply but I wanted to submit my comments as well. I've got the first, third and secret endings.

I love the game, I love how your choice mattered.

To Catherine Kissmyarsefb and Fallout Coy

Fallout Coy is correct. The "overpopulation problem" was a bullshit excuse. He just wants less zombies in the world so it's easier to control (so if they never got to space or they did, it's not their problem anymore.)

The Zombie president is human, he's controlling all the other humans by manipulating the zombies. He and his family live the good life, while profiting on the murders of innocent people. He is such a monster that he joked about sending some random person that mocked him to the farm during dinner with his family.

He controls the zombie by coming up with rules that only benefit him and not zombies them self.

No zombies ever questioned the president and lived to spread the word. The guy keeps a tight ship. Any troublemaker like our main guy will disappear.
The human guy (The "dumb" brain that's from the farm) is part of the resistance of brains to try to take down the zombie president. He's been freeing the other brains and trying to make up a plan.

I really think this game is amazing because in the end even though it's basically about the human greed profiting . The zombies drove the story and is the main focus point.

(sorry for replying to an old comment of yours, I just played this game so I just got to seeing the comment!)

Can't load the game, anyone have a solution ?