Zombie at the Gates 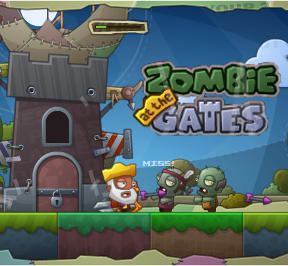 If you were king and zombies were approaching, the logical approach would be to send out your army to wipe out the threatening horde. Not if you're the king in Zombie at the Gates, a defense game by Ridlake. If you are this particular king, you decide the best defense is to collect resources to upgrade your castle to a flying castle and float away from the monsters. All by yourself.

Your king starts out with a measly stick to fend off approaching zombies, as well as a stomping attack that can stun your opponents for a short time. Use the [arrow] keys or [A] and [D] to move around. Your ground pound is done by tapping the down [arrow] or [S] key twice quickly. Your weapon is used to attack, but also to harvest rocks, wood, wool, and money out of surrounding resource nodes or crates. As you wander the castle grounds, zombies pop up out of the ground and attack you. Finding the balance between killing them while also collecting resources is the key to the game. The round ends when you kill the last zombie, even if you haven't had a chance to collect everything. The more you collect, the faster you can get out of there!

The zombies get tougher as you go along, so it's a good thing you have the option to upgrade yourself and your weapons. When did zombies learn to wield spears?! You can eventually get a sword instead of a stick, and a bow is available for ranged attack. The king himself can also be upgraded with a faster walking speed and health. The playing field increases as you progress as well, with safe spots in the middle you can duck into if you get overwhelmed.

Your castle upgrades automatically depending on which resources you pick up. Eventually it does get a couple of arrow towers, but they aren't as much help as you'd like them to be. The controls feel a bit clunky until you get used to them, but shouldn't slow you down for long. The cut-out graphical style looks amazing, and the sound effects and music are wonderful. While not super difficult, nor very long, Zombie at the Gates will nonetheless satisfy any zombie killing craving you might have had.

Play Zombie at the Gates

This game has a beautiful aesthetic. The gameplay, though, is limited and sometimes frustrating. I wanted to see the castle take off, but I wasn't entertained enough to make it to the end.

The whole "stage" look the game is appealing and reminds me of Super Mario Bros. 3, but the game itself as repetitive and got boring fast. Nothing really different from other zombie games. The ending also disappointed, which really left a sour note.

Can anyone explain the "lives" to me? I started with three lives, but I would get killed once and I'd have to start the level over. Then I bought a fourth life, but as soon as I got killed, I had to start the level over. Any idea why the lives even exist? I thought from what the tutorial said that you got to go through all three ( or in my case, four) lives before you had to start over but that hasn't been the case--one death, boom! Restart.

You're thinking of "lives" in a different manner than the game is. You start with three hearts and lose one every time a zombie gets you. That's what the "lives" you can buy are and can get yourself up to six. You also can get fully revived once if you die within the medic-sheep zone.

Still, even fully equipped with lives it's so easy to completely get overwhelmed by the zombies. If you don't have high enough level weapons you can't kill them fast enough to fend them off, and you also (as far as I can tell) don't even have the option to play earlier levels or anything to grind for more money for upgrades. There might be some trick I'm missing but this felt like a very poorly designed game to me.

Actually, while it's true that you can't go back to levels, once you complete the game you can do the last level over and over.