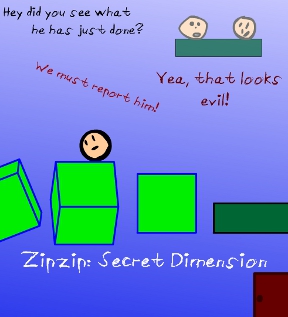 Ever have one of those days when you feel... not so special? Just another face in the crowd, disenchanted by the superficiality of everyone around you? Then why not... complain about it on Facebook like everyone else! HA! Just kidding! Instead, you might have something in common with the hero of Ttrkaya's physics puzzle platformer, Zipzip: Secret Dimension. When our roly-poly protagonist discovers he has the unique ability to manipulate floating green shapes, he's initially thrilled, but he might stand out a bit too much in the eyes of others. Use the [WASD] or [arrow] keys to move around, and click and drag on green shapes to rotate them to be used as platforms or to otherwise influence your surroundings. Try to make your way to the door at the end of each level, and press [R] if you get stuck.

At its heart, Zipzip is a solemn nod and a bro-fist to anyone who has ever felt out of place in the world and secretly wished they were destined for something greater. Of course... things do get derailed a bit when the whole cult shows up and then the thing with the cannon and the castle and the I don't even know what. It's weird, but also kind of weirdly charming if you can handle the short, strange ending. The puzzles are typically fairly simple to figure out, though getting your new green shape powers to behave the way you want them to might require a lot of experimentation and a bit of luck. (Is this how the Green Lantern feels?) It's the sort of thing that makes you go "... huh?" but is still a clever little concept worth checking out, and perhaps being built upon in the future.

That is really the ending? REALLY? Gosh. Was there any other story line?

The music is wonderful! Seems like a bit of a nod to the Spanish Inquisition.

I'd probably play a different (and hopefully better) future version of this game because I like physics platformers, but that was...not fun. Too short, the ending wasn't great, and even though it was mostly too easy, the hard parts (getting the green blocks to do what I wanted) were way too hard/arbitrary.

Juxta: I think the

at the end shows more of what the creator was getting at. Besides, just

look at the people's hats, especially the guards

and you'll see what I mean.
-Trevs

The only thing which made this game hard was indeed controlling the green platforms. Didn't take too long to beat anyways so not much worries there. The story could have ended in an another way, this one didn't please me. Not much to say about graphics really. Could be a little more polished, but they're decent as it is.

Awkward manipulation of green 3D objects made the game much harder than it should have been.

No matter the ultimate point of the story, I still believe there is a definite nod to the Inquisition, particularly in the music.

Other than that, it does feel more like an experiment than a full finished game. I would like to see this idea developed further.

I'm really not a fan of these fish-in-a-barrel allegories. The ending puts a TINY twist on it, but otherwise it's an unchallenging story of, "Awesome stuff sure is awesome, isn't it? But some people are just Inherently Bad For No Reason and will totally try to harsh you for it." "Bodilies", while a bit more sophisticated as a game, fell prey to a similar pitfall of shooting for the lowest-scoring hole on the philosophical skee-ball ramp.
I'm also not sure who thought programming two dimensions of movement was sufficient for moving three dimensions of space, but they were wrong.

I really enjoyed this game. I appreciated the simple visuals and the relatively simple gameplay -- that allowed for the story to shine through pretty much unhindered. Although any plot is merely through snippets of dialogue, I think it really shows a story of how one can get thrown into events

based on others' misconceptions. The whole time the character just follows along, not inciting anything... and, well...

Linguistic note: "zıpzıp" is Turkish for "marble", which makes sense given the protagonist's appearance...