Part social experiment, part Rebuild, Screwfly Studios' indie strategy simulation Zafehouse: Diaries is about keeping a group of five survivors alive at the start of a zombie apocalypse until help can come... if you can keep them away from each other's throats. See, unlike other games, the characters here are all strangers, and they all come from drastically different lifestyles and backgrounds. One might be a wealthy surgeon who has a lingering bit of distrust for the poor. Another might be an uneducated police officer who claims he isn't racist. Forced into an already tense situation in crowded quarters, these conflicting personalities and ideals could quickly spell disaster if you can't manage them properly, all while trying to scout the city and find when and where help will arrive and struggling to find supplies to boot. With a completely random set of survivors and town layout each time, as well as an additional optional scenario where you can choose to play to scour the town for the parts to rebuild a car, there's a ton of replay value. If you really want to get creative, you can even use the custom-content manager to load in and edit everything from custom-made survivors using your own photos, user made professions, locations, and more! 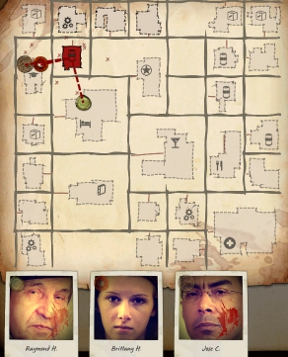 With the action presented in the form of a diary that writes itself as you play and a map of the city you can drag your survivors around on, gameplay comes down to knowing how and who to delegate tasks to. Click on the current location any survivor is in (each survivor is represented by a unique token) and you'll be presented with a list of options, where those greyed out are unavailable. Just click on one of those choices to assign someone to do it, be it searching for supplies, making barricades, watching for zombies, and more. You can assign more than one survivor to a task, and any idle characters will make use of beneficial items like chess sets and the like to keep themselves busy. The game is turn-based, so click the watch in the diary screen to advance time one hour and see what the fruits of your labour are.

To move to a new location, you'll need to drag a character's token to that place which will set their action to "Investigate (Location Name)". Click that action and you can both set whether you're just scouting, actually trying to breach it, as well as what supplies you want to bring along... just in case. Contrary to roughly every zombie movie ever, holing up in one location won't do you much good, and you'll want to move around frequently to hunt down supplies... both for day-to-day living and eventually escaping. Food is important, of course, but so are first-aid items for treating survivor injuries. Things like hammers and crowbars are used not just for building barricades or engineering new items, but also close combat and breaking into places. Just be careful. Your actions can attract zombies, and if you aren't properly prepared, party members can and will die. From time to time you may also be given a special scenario and a choice... think carefully about how your team will react and the risks involved before proceeding. 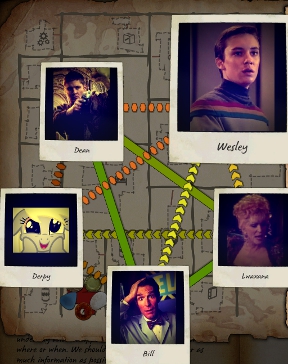 The most important part of the game, however, isn't weapons or supplies or even securing a house. It's trying to keep your ragtag group of people functioning as a unit, polite if not exactly friendly. You can click on character portraits at the bottom of the screen to get a detailed view of their background and personality, as well as a coloured diagram representing their relationship with everyone else. As you might imagine, sending two people who hate each other to do the same task together, no matter how qualified they are, is asking for trouble, so pay attention to who gets along best with whom. Each day, you can choose to spread a single rumour about a single person around the group that can change how others view them... perhaps you let slip that your wealthy surgeon often offered her services for free to the poor, or that your chef had some celebrity connections, and you may find it makes others feel better about them.

Analysis: Zafehouse: Diaries is not a game for people who are afraid of experimentation and failure. The fact that the game's "tutorial" is just a link to the manual will turn some players off, but hey, if you're like me, you see reading instructions as a form of weakness anyway. (That's what I tell myself when looking at my lopsided, poorly assembled furniture anyway.) And while it's true that the game may seem dauntingly complex at first blush, thinking like an actual survivor will get you far. Focus on the necessities... hunting for supplies, keeping the troublemakers apart, moving during sunup, and of course, watching for zombies. Don't spread yourself thin, but don't stay in one place for too long either. While it's true that the game seems to take a suspicious amount of glee in chucking misfortune at you, it's also true that you can be prepared for a lot of it just by making smart choices about your surroundings and your party. It's the sort of game best suited for slow, methodical players who like the idea of careful planning, exploration, and don't mind a lot of reading. Plus, I cannot stress how much amusement I got out of the custom content editor. But you can probably guess. 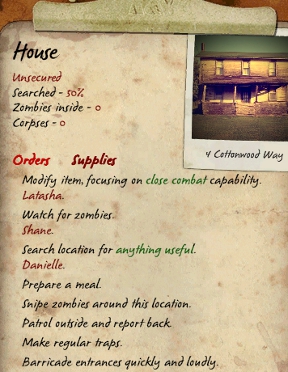 There are a lot of zombie games out there, but Zafehouse: Diaries might be the first one to really focus on and provide an accurate portrayal of people under pressure. Everyone likes to think they'd be able to lead a group of survivors to safety, but this game shows it wouldn't be that simple. Especially if you're dealing with people who might not have gotten along under circumstances where they weren't trying not to have their guts eaten while rationing out a single packet of beef jerky between five stomachs. The hitch, unfortunately, comes in the lack of detailed control and a feeling of distance from the whole proceedings. Not being able to expressly tell your group which entrances in a house to secure, for example, is frustrating when you'd really only rather barricade the main doors on the first floor and they tell you they've secured the upstairs bathroom window. It makes them seem a little... thick... which is only reinforced by not actually being able to see any of the details of their interactions. As a result, when they occasionally get violent with one another, you have nothing to go on other than the simple formula of incompatible traits, and it feels less like tempers reaching a boiling point and more like a bunch of variables behind a computer screen flipping you the bird. Which, y'know, is what's happening, but suspension of disbelief helps.

Zafehouse: Diaries is a surprisingly intricate and yet also casual little strategy simulation about the zombie apocalypse. The sort of thing you can play whenever you have a spare minute, and will probably wind up trying to make even more time for if it grabs you too. It's not perfect, of course, and having everything fall apart because a homophobic firefighter refused to follow orders from a gay athlete (who did a lot of charity work might I add) during an attack and got everyone eaten is still frustrating. But with virtually endless replayability and friendly user-content capabilities, it's one of those weird little games that deserves to find its audience and be appreciated by the people who will love it best... and have the patience for it.

The demo really does a poor job of demonstrating the game. When you cut off basic, primary elements of gameplay (like actions for the survivors to take), you make it hard to know which aspects are fundamental to the game and which are consequences of your restricted suite of choices. A tight time limit, being unable to win or save, and restricting customization options are already plenty. I can't say I was able to meaningfully learn enough about the game to make a purchase decision.