Yume Nikki is one of those cult classic indie games people love to fight over, largely because the surreal horror adventure game about a girl exploring the landscape of her mind without leaving her home is so ripe with possibilities for interpretation from every angle. The game has been out for over nine years now and players still can't agree over what, exactly, it's about. So ZykovEddy's fangame Yume Nikki 3D, being a new "adventure" rather than a 3D remake, might be new fodder for debate as it sports all new locations and effects to discover, consider, and make your best "bwwuuuuuuuh?!" sounds over. And yes, you'll see a certain iconic scene in 3D as well. There's no real dialogue or exposition... just you and a strange dreamscape to decipher. Think of it like Metroidvania meets Earthbound meets Silent Hill meets... I don't know... Quentin Tarantino after a horror manga binge. 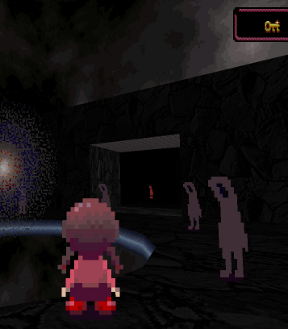 As in the original, you control Madotsuki (generally assumed to be a young girl, though "her" appearance could honestly go any way) who won't leave her cramped apartment any other way than dreaming. When you interact with her bed, she'll fall asleep, and from there you can explore a series of bizarre and often unsettling words via a nexus of doors. (Some of which are locked for future updates.) Use [WASD] to move, [spacebar] to jump, [E] to interact, [shift] to use whatever equipped effect you have, and [enter] to open the menu. From the menu, you can either "Wake", which will cause Madotsuki to pinch her cheek and awaken in the real world, equip various effects you've gathered, or quit the game. Effects are equippable things you can obtain from certain characters, ranging from visual changes to special abilities, and there are six of them for you to find here, along with three keys.

It's hard to say whether the "3D" perspective helps or hurts the experience, since it does make some scenes more effective, but at the same time, also makes some areas look a lot more bland. Without the forced, fixed perspective, you get a lot of boring, low-rez skyboxes and flat backgrounds that can make exploring disorienting in a frustrating way rather than the tone Yume Nikki is (in)famous for. 3D has a lot of little references to the original game in the things you can find, and a lot of recurring imagery as well, and the sprawling maps are filled with secrets to uncover despite only having a fourth of the effects of the original game. It's debatable as to whether its nailed the ambiguity of some of that imagery and recurring themes the way its source material did, which is part of the enjoyment for a lot of fans, but Yume Nikki 3D is still an intriguing, mystifying experience with potential for even more as updates arrive. The fan theories for the reasons behind Yume Nikki's startling events and imagery vary wildly, and whether Yume Nikki 3D fits with yours or stands alone like the cheese is up to you.

I dunno, it doesn't seem to capture the atmosphere of the original. Nothing is really that cryptic or enigmatic, and there's not much to interact with.

I think I already know the answer but should I play the original before I play this? I know, I know... I'm the only person who hasn't played Yume Nikki. I attempted it but didn't get into it but I'm guessing it's time for a retry.

Sorry, but unauthorized "3d remakes" like this, and titles like .flow, are blasphemy IMO. It shows no respect for the genuine creativity found in the original game. I just think we need to show more respect for indie freeware developers.

If you want to make a game similar to Yume Nikki, at least put a twist or two on the formula--"Middens" is a good example of this. It was inspired by Yume Nikki, but felt like its own game.

You're certainly entitled to your own opinion, but I feel calling this blasphemy and uncreative is a bit dramatic. As I said in the review, this is not a remake, it's a fan spin-off with all new content and areas. I think being so impressed and inspired by something that you make something else in homage of it shows only the utmost respect for something. You've been moved by something someone else has made to an extent that you want to be part of it, and unlike other rip-offs out there, these games aren't claiming to be the original... they're fan projects made with love. Whether you like it is another personal matter entirely, but I think it's a stretch to call something like this disrespectful.

I found this to be a very interesting concept, regardless of how well it matched up to the original story of Yume Nikki. I certainly hope creator ZykovEddy, uses this as a stepping stone to create something bigger and better in the future; I believe he's on the right track in fashioning something that's truly artistic and amazing. While there was lots of eye candy and much to interpret, I only wish that there was more interactivity and secrets to discover.

With such a game like Yume Nikki, half of the charm was finding the effects and using them in different ways to see how they'd react with the environment. Almost like a scientist working with different chemicals just to see the various outcomes of what strange and exciting things could happen. This would be my only suggestion should ZykovEddy continue down this creative path.