From the creator of Youda Camper comes another overtly-titled casual game: Youda Farmer. In this resource management sim you play the role of a farmer growing and gathering crops and other food products to sell in town for profit. Using the money you earn, buy new facilities and upgrade existing ones, stimulating the town itself to open new shops and expand current ones. 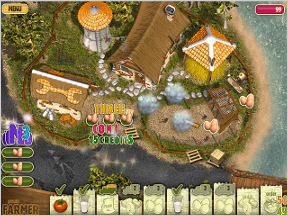 The world of Youda Farmer is divided into two major zones: your farm and the town. Each round of play reflects this division and takes part in two stages. When working in the farm you'll focus on growing/harvesting food products in the most efficient manner possible. Everything happens automatically, all you have to do is click on the icon. So, for example, if a flour order appears at the bottom of the screen, click it to start growing, and once the bag is produced just drag it into a crate. The truck soon comes by and automatically loads everything up before moving on to the next item. The challenge comes from deciding the order in which to harvest things, as each click sends your truck to a different part of the farm. Do you ignore the flour in favor of loading just one more crate of eggs, or should the most urgent order get some attention?

After the farm round ends, your truck putters into town, ready to deliver goods to the various businesses. Here, things work in a similar manner as harvesting crops. The baker might order some eggs, in which case you simply click his icon followed by the specific orders floating above his character. The truck comes along, unloads the food, and you get paid. Easy!

When both rounds of play are complete you get a chance to spend the cash you earned on a number of new buildings and upgrades. Each one adds another layer of product to your inventory, as well as another route for your truck to drive. Make note of where the new building appears on your map, as a key to shaving a few seconds off of each harvesting run is to hit each stop without having to backtrack! 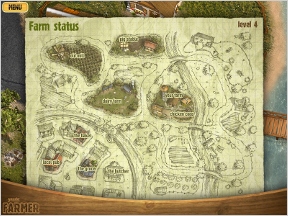 Analysis: I was initially overwhelmed by Youda Farmer's seemingly complex setup and interface. With all these buildings, all this driving, and so many orders popping up out of nowhere, how was I supposed to make sense of it all? A very brief tutorial gives you a feel for the basics, and after that you set out and start farming on your own. Before long I felt comfortable with the game, so while the learning curve is slightly steeper than most games of this kind, it certainly isn't an obstacle.

After getting to know the game, you'll get sucked in by its unique take on a tired genre. It even surpasses innovative games like Airport Mania and Now Boarding in a few areas. Instead of directly doing any farming, you're more of the schedule manager or truck driver, though even by that definition the game fudges the rules quite a bit. And besides, Youda Truck Driver doesn't have that catchy ring to it.

My only real complaint with Youda Farmer is the intense difficulty that appears much too early in the game. I had already lost a round after 20 minutes of play, something that is practically unheard of in casual games. Saying things get "hectic" would be a gross understatement, but with a little practice you can get things back under control.

A resource management game of a different sort, Youda Farmer isn't afraid to break the mold in a few key places to deliver something challenging and unique.

Youda Farmer is available to download from these affiliates:

I love this game! I actually liked it because it was hard. It's very different from most time management games and has a higher learning curve for people like me that play time management games a lot. I managed to beat the game without replaying any level more than twice, but it was nice to have a game that challenged me a bit.

Wowee this is hard with a touchpad...

I love the graphics in this game, and the basic gameplay, but it gets way too hard way too soon! I'm stuck at level 7, which I tried about 50 times, but I can't get the 30 items in time. Too bad, because I've lost interest to try again.

I have download the game, and it seems not to be working well, cause i cant put the flour in the box. First i played it online and i did it, but now that i have the game in my pc, i cant do it.. anyone knows why??? Thanks for the help!

This game went from very easy to very hard way too fast. It also seems to be to be unfinished. Like the maker got half way and decided they had enough and just ended it there. Its glitchy. Not enough upgrades for the truck speed, store owners who never mix ingredients for better orders, and places on the map that clearly could have been used that make you believe there is more coming when suddenly surprise!!! Its over... I didn't even get to unlock all the colors for the truck. When its over you think ok. I get to go bk and use the thrilling new color I worked for... nope. You lose everything and start over again. Tips and all... no way to turn them off either. Too bad, it had potential to be a good game.

hints for collecting the items if you are getting stuck:

1) don't immediately grab the first order that appears on your screen at the start - check which way your van is pointing and wait for 3 or 4 orders to appear so you can choose which order to do them in. You have more time at this point than you expect.

2) fill up as many boxes as are available at that part of the farm.

3) try to keep track of which direction the van is coming in so you know which of the available orders you want to go to next.

4) If the van hasn't caught up with you then when you have filled all the boxes at a particular site take the time to work out which of the available orders you want to do next - go for the nearest ones, unless you are in real danger of losing an order and need to go there first.

Most importantly:
5) Don't click on a completed order until you absolutely have to - ie until it is right at the point of disappearing and you missing it. This slows down the rate at which new orders arrive and means you should be able to keep it under control. I find the first 15 orders are the hardest, at the point everything becomes much less manic.

It does seem a bit incomplete, but for the price I paid, it's fantastic. :-)

[Yes, you're right. Prices for casual games in general have declined since this review was written. The links in the review above point to Big Fish Games, which is the place we recommend above all other sites due to their lowest prices in the industry and their excellent customer support. -Jay]

Hi, I am working my way through the trophies book only I am pretty sure I have delivered 200 flour by now!! Do I have to deliver them all in one level does anyone know? (It would be nice if you could see as you were going how many you had done, so you can see how far you have to go).