You Still Won't Make It

You Still Won't Make It is a high difficulty action game from Vetra Games. It's name and form with this platformer, as each time you start a stage you know you probably won't make it to the exit. Even if you do, it won't be without splattering your insides over a precisely-placed spike trap. With level design by Karoshi veteran Jesse Venbrux, You Still Won't Make It is the kind of indie game you're going to hate while you fall in love with it. 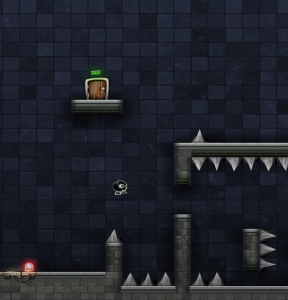 The basic controls behind You Still Won't Make It are as simple as can be. You can walk left or right, you can jump, and you can jump once while airborne. It's simple enough to hop over sharp things and avoid various obstacles as you work your way towards the exit. It's another thing entirely to ride a gust of wind over a literal death trap just before you do a double jump to worm your way around an L-shaped wall only to land on a platform that falls out from under your feet.

You Still Won't Make It currently has just over 50 levels to complete, with the first dozen or so serving as a surprisingly calm introduction to the basic mechanics. After that, though, you won't be afforded a single pixel's worth of leeway. Most levels have a checkpoint to give you a tiny respite, but other than that, it's just you and your own stubborn refusal to give in. Good luck, and have fun painting the platforms red!