You Must Build A Boat

Nobody knows why, but everyone seems to agree: You Must Build A Boat, and who are we to argue with commands issued by a nameless disembodied voice? In EightyEight Games' sequel (available for PC, Mac and Linux in addition to iOS and Android) to the smash hit 10000000 you set off with nary a sextant or textbook on admiralty law to build and upgrade a boat, capture creatures for your crew and adventure for fun, riches and better equipment in this frantic match-3 upgrade-packed indie action arcade game. Clearly this can only end well! As with the original you'll be sliding rows and columns of tiles to match three or more, gather resources, place hits and unlock treasures and traps! But this three-years-in-the-making sequel brings a much cleaner look to the familiar tile-swapping interface. Instead of gathering wood and stone for your castle, players gather Thought and Power needed to assemble formations of collected creatures on your ship, each providing permanent buffs. This time there's no pausing once you've made a match either; tiles refresh instantaneously, and you can even slide them around while the new tiles are being placed. Like the original, dungeon runs will come with quests you can satisfy for resources, but instead of mere riches you'll get items, creatures, and new crewmembers for your ship! Each new crewmember added to your roster has a room of their own and provides a new function, like offering weapon upgrades or a transdimensional sphere with a portal to other dimensions who will find buyers for the assorted items you pull from dungeon chests. Your ship is powered by your crewmembers, so it will sail to new regions and then stop until you complete enough dungeon quests to gain the crewmembers necessary to power it further. This one also features a very smooth in-game tutorial so you can get started immediately and learn as you play. 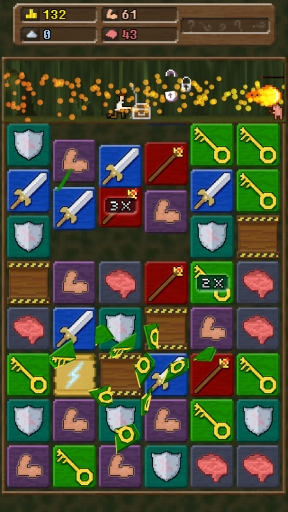 Whole rows and columns can be swiped or moused to make tile matches of three or more. Rows and columns will wrap around the edges of the screen, and if you're stuck for a match it can be useful to slide a row that has two of a tile type on the same edge, and a third on the other edge, to make a match. Matched tiles are eliminated, providing benefits determined by their type. Swords and staves are useful in combat, shields will improve your defense, keys unlock chests, and arm muscles and brains are your Power and Thought respectively. Simple enough, but getting matches for the right tile type when you actually need it's another story! Often you'll have to eliminate some matches you didn't need in order to free up the board for tiles you do. The important thing is to resist the urge to just stare at the board contemplating your options. The longer you take to Do The Thing, such as unlock a chest, defeat a critter and so on, the more your character will slip to the left, and once he's off the screen it's level over! Doing The Thing more rapidly also means more run time, which enables your character to stay to the right of the screen and have more time in the dungeons. Each dungeon run will come with quests, and completing these will grant you new crewmates and creatures for your ship, each with new capabilities. Some will allow purchases to upgrade your weapons and shield, while others enable risky financial investments or keep track of what you've learned about monsters and dungeons. The upgrades available onboard improve your skills and abilities for subsequent dungeon runs, so even when you didn't succeed, you've made some progress! 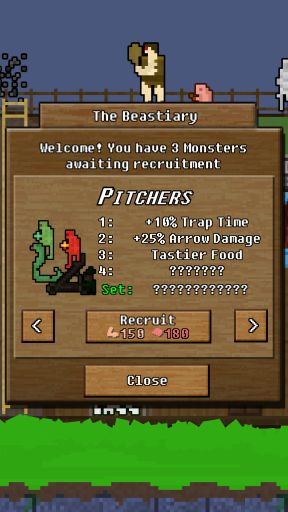 Speaking of, we were very glad not to encounter a single instance of the Timer Trend that's so prevalent in mobile games. Play as much as you want, make progress, and don't worry about 'Wait half an hour before you can play again!' timers or even a single in-app purchase. Somehow even as the difficulty ramps up, that ability to keep coming back at it for another try - and to make it on your own merits rather than your pocketbook's - makes this one fabulously addictive! The ability to slide rows and columns of tiles essentially arbitrarily as new tiles are being placed makes room for some ingenuity for those with faster reflexes. You Must Build A Boat does require a certain mindset for row-and-column-sliding tile matching not found in most games of the match-3 genre where you're relying on individual tile swaps, beginners will find cultivating that mindset will become second nature as they begin to play through it. After matching tiles to earn your freedom in 10000000 it's not clear why you've apparently decided to take a ship full of mutants, monsters and Egyptian pharaohs on a trip around the world like some cruise line for bad guys and interdimensional weirdos - we know we'd have a tough time sleeping peacefully in our cabins - but it's great finding your home vessel growing as you progress and the memorable characters, upgrades and new capabilities around every corner make this one not to be missed!

You Must Build A Boat (Android)

You Must Build A Boat (iPhone, iPod Touch, iPad)

Wow I thought this game was easy... it really challenges your skills even though the game looks simple not to mention very addictive...

Having played a lot of this, I like it, but it feels far more grindy than its predecessor. The extra tile types mean you can really struggle to meet achievements necessary to proceed (the "blow up ten tiles with a crate bomb" one took me FOREVER, because it took over an hour for a SINGLE crate bomb to spawn), and others like the damage threshold, are dependent on so many other factors left to chance, like multipliers, the type of creature, any dungeon modifiers, etc. I'm beyond the Vault now, with a set of achievements that require me to freeze three enemies, then both electrocute AND throw a fireball at enemies that have been frozen, and I have not seen any freezing spells from crates in a long, long, long time, much less simultaneously with others. It's still a fun game, I just feel like the balance and pacing might have been skewed when extra tile types were added, so the whole thing doesn't feel as smooth as it could. I do, however, like all the different merchants, the addition of crewmonsters, and so forth.

I agree with much of what Dora said, but wanted to let you know there's a drink at the pub that causes way more spells to drop, which help a lot with those types of tasks.

As for hitting with 188...to the grind! Gotta level up those weapons!