You Have 8 Bricks. That's it. That's all. Just eight. And with these eight bricks, at least one must make the daring climb up and out to the surface and to the world that awaits you there. Rarykos's avoidance platform game is a short, high difficulty, tower climber controlled by either the [arrow] keys or [WASD]. In the beginning, you must mash any key to break lose and start your climb by jumping up. Pressing the up [arrow] or [W] in the air lets you perform a double jump which helps as you climb the floating platforms. There are three ways for you to die, with blue lasers that shoot up from the bottom (they don't hurt until fully charged), and white squares shot straight up (a pink glow will show you where they are coming from), and of course rising lava wanting to claim all four of your corners. It doesn't seem too hard and the climb is short, but the path is narrow. It's easy to get knocked back to your doom. One hit kills and you'll soon find eight lives may not be enough. 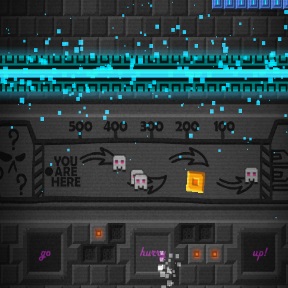 Okay, so there is a reset button, and after eight deaths you can just hit that and start again. The idea of the reset button almost makes the title seem arbitrary, but you're probably going to need more than eight to get to the end. Well, most players. I know there are some who have skills enough that this game won't be much of a challenge, but the ending is well worth it, even if the game doesn't take you very long. There are a lot of cryptic things going on, such as flashes of strange images, and warnings left on the wall. It's kind of a mystery as to what is going on, and one that isn't clear until you escape. As short as it is, You Have 8 Bricks makes up for it with great music and a grand story you don't usually see in climbers. So take a rage break, and try to see if you can scale this using the power of geometric shapes.
Play You Have 8 Bricks

A little too easy for my taste. Managed to win in the first game, although having lost two blocks due to a small miscalculation and a cheap shot on the game's part.

Also, too... slow. At least in my end, with the sound running OK, it seemed as though the block was moving through molasses or other high-viscous medium. Having seen some gameplay videos, it seems to be a possible graphics issue on my part, though.

I wonder if the ending is different depending on how many bricks you wasted.

What's that suppose to mean?

"Impossible geometry" could be referring to the info in the below links...

Knowing I can double jump is information I need from second 1.

The jump button is really unresponsive for me. Sometimes there's a delay or no response from my left and right too. Is this just me or is it the game's fault? Either way, makes it extremely difficult to play. (Yes the difficulty is supposed to be high, but this is ridiculous) I can barely make it halfway up on a good run.

Does this even qualify as a pun, let alone a bad one?

That was reeeeeally bizarre. Having spent my afternoon on this game and finally beaten it, all I'm left wondering is:

Was I just treated to a weird piece of social/political propaganda from some group I may or not have major ethical objections to, if I knew who they were?

I don't mean to be demanding, but as a human being, that's the kind of thing I appreciate having a heads-up for in advance. I wouldn't have played the game if I'd known that was apparently the developer's agenda. I feel used in a way that is totally outside of gaming at all.

JIG staff, would you please consider putting some kind of a notice in the game's description that there's this kind of opinion-based RL stuff in the picture?

@Lysana
I'm sorry you felt this game was pressuring you with an agenda. I saw it more as

just a play off of current pop culture trends with the only indented agenda being an opportunity for a silly pun.

an interesting twist on story telling with you realizing that you were the 'Ancient Evil of Impossible Geometry' instead of you trying to escape it.

But I can see where you may feel some opinions being pushed upon the player.

@ Lori.h - I don't mean to be rude by asking this, but I'm new here and I don't know: are you a representative of JIG and thus your reply to me is the site/staff's official position on this, or are you answering with your personal opinion as a fellow player?

@Lysana
You're not rude at all. =) I'm actually the author of this review. I found the game and enjoyed it enough I thought it was something others on here might enjoy as well. I didn't see it as pressing an agenda, other wise I would have had second thoughts about doing a review and would have been sure to give a warning.

Oh, I could have looked and seen your name there! That's the kind of overlooking-the-obvious thing that gets me stuck in escape games. :)

All right, thank you for taking the time to answer me. I still strongly believe what I originally said - that this game should have a warning in the description. Someting as simple as: "This game does tie in with a certain real-world cultural/political agenda. For those who would like to know what's behind it before you decide whether or not to play, click [here] for the group's website." That would give people the option to make an informed choice of what they were getting into, while not spoiling the "joke" for those who'd prefer to be surprised.

That said, it is, of course, your decision. I understand that fact and I respect it, even if you make a decision I strongly disagree with.

I think Lori and you have done a good job in illustrating something important about this, which is that there's no way to predict how every person will respond to something. Since different players have different opinions, lives, and emotions, many of them are going to recognize or interpret themes in content that others just won't. It doesn't make them wrong, but it does show that it's largely difficult to apply the tag you're suggesting all the time because, well, arguably EVERYTHING is controversial to someone. :) In the case of this game, it's actually considered to be a joke by the author, and not an actual furthering of any sort of political agenda. We encourage players to intelligently and thoughtfully discuss their feelings on games and the themes they find inside them in the comments... regardless of whether you agree with a game and its message or another player's interpretation of it, it's the only way to open a discussion and make any headway as human beings whatsoever.

I understand, Dora. And I've said about all I want to say about this. So before I head out of this conversation entirely, I'll just say this: Being told by the game's ending that, for playing the game as it was presented to me,

That just plain makes me feel dirty and horrible. I have to wonder if part of why this isn't striking other people as significant they way it does to me is that

maybe the group in question is generally considered pretty innocent and something most people can approve of.

I wouldn't know, because I only keep up with these things just barely enough to get the idea that something of that nature is being alluded to. Still, as you pointed out, many things are controversial to someone, and politics is a touchy subject. If I were running a site like this, I would take care to err as much as possible on the side of respecting the beliefs and comfort of even those few who might be hurt by something.

I guess I just have to compare this to the thoughtful alerts you guys keep putting on advergames, for the benefit of however many people like to know that about a game in advance. To me, the sale of political ideas (in joke form or otherwise) is at least as important a concern as the sale of a company's services or products.

Hey, you even put warnings up for pixel-hunting! I can't imagine that is a personal or ethical concern for many people.

But hey, it's your site. And like I said, I won't be stirring up any more dust in this comments thread. I just wanted a chance to say what I believe, and I've done that.

Thanks for running JIG. Even if, as this situation demonstrates, it's not an entirely safe place for me, it's at least safer than most of the gaming sites out there. So, thanks for that much.

Lysana, I think you misunderstood me. :) I wasn't arguing against tagging content. (Though I WOULD argue we don't "warn" about pixel hunting... We point it out as a gameplay mechanic and critique.) I was pointing out that we can't predict everything that will upset or concern someone, and thus rely on the thoughts and discussion of our readers to bring these things up. That's all.