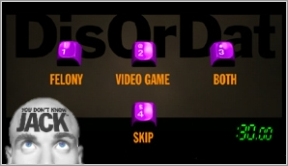 Trivia games are somewhat underrepresented here on Jay is Games and on the web as a whole, so I was glad to find that a brand new adaptation of Jellyvision's You Don't Know Jack is now playable at YouDontKnowJack.com.

Every episode of You Don't Know Jack so far has been a DisOrDat, which features two categories. Each round requires the player to determine which category a given word fits into. The controls are very simple; press 1 to select the first category and 2 to select the second. Some episodes give you the option to press 3 when the word fits in both categories, and you can always press 4 to skip a question. A correct answer earns $250 of imaginary money, while an incorrect answer will deduct $250 from your earnings.

Analysis: You Don't Know Jack has made the transition to Adobe Flash with much of the wit and attitude of its CD-rom forefathers, as well as a great deal of mature content. Surprisingly, each episode features full voiceovers, although the game is playable without audio. Unfortunately there is no multiplayer support. I also would have appreciated more questions per round; it took me over a minute to load each episode and sit through the introduction, while the game itself lasts no more than 30 seconds, and usually much less! On the other hand, with new episodes appearing daily and the ability to play previous games, there should be no shortage of You Don't Know Jack content for the quiz-hungry.

this game's pretty good, don't have a problem with load times, but being able to skip the intros would be a better idea. Also being english some of the US political games don't make quite as much sense and don't carry the same humour factor so tags would be useful. I also reckon a longer multiplayer version should be in the pipeline

One thing to keep in mind is that this is a type of question found in ALL versions of the cd-rom game. The fact that there are only 7 questions and 30 secs is the way it's always been. As far as skipping intros, just press the space bar when they introduce the buttons. Great to have a daily from these guys, they are often quite funny!

Man, this brings back memories. I think I still have all or at least most of the CDs from all the original games.

LOL this is funny! great find

and cs192 you can skip the intro just press "space"

I used to faithfully log in each week to play You Don't Know Jack: The Netshow. Had to be late nineties, each week would have a fresh crop of questions with full voice-overs and all.

Eventually they canceled the show saying it was costing too much and the ads weren't generating enough money.

Frustratingly, they also said one of the reasons the show was canceled was because they didn't charge the customer... but they canceled without even trying a paid-content route.

Well, hopefully this iteration doesn't go away any time soon. And, hopefully, this means another retail YDNJ game is on the way.

i used to own this game growing up and would spend countless hours playing it! thank you SO much for posting it :)

On a side note -- where did the "favorites" link go? I can't add this to my favorites even by going to the edit favorites page...

This game definately has good potential, but the fact that each game is so short, and that it's really a bit slow paced for an action trivia game puts me off of it a bit. No offence to the YDNJ guys, but I'd much rather play No Brainer.- .:Mev...

My bad about the favorites link. Thanks for the reminder! All fixed. =)

Measure: Check the site. They've redone all the old games so they'll run on modern computers, and YDKJ 6 is also available.

Thanks, Jay... but you underestimate my hardcore devotion to the YDNJ series... YDNJ 6 is probably over 3 years old now... I know this because I had it when I got married, and that's coming up on 3 years now.

Anyway, I don't think they've resurrected "You don't know Jack: The Netshow." At least, I haven't found it the few times I've looked through this website. Although they could have the disc-version of that game, called "YDNJ: Offline"

The new Dis or Dats are great, but I'm really hoping the retail games come out of their three? year slumber and we can see a YDNJ 7.

As a sidenote, I believe "You don't know Jack 4: The Ride" was the high-point of the series, But I've enjoyed every one of their games.

Thanks for the favorites fix! :)

Wow. Great find yo! I love YDKJ! I wonder if they have "The Ride" instock... I am missing the install disk. It was in my old car's CD player and I got in a wreck.

the space skipping section only works after the skip button's been introduced, and only skips the amounts section of the intro

it's nice to see that Jellyvision is (back) alive in one form or the other. That's great.

I believe they also built Outsmart on MSN's Zone, which is sometimes fun.

Yeah, Jellyvision was behind Outsmart. Closest thing to "Jack: The Netshow" that I've ever seen. But, if you weren't interested in the episode's celebrity, there wasn't much point to playing. I have enjoyed several episodes of Outsmart, though.

HA! that was barrels of fun (i've never heard of these disks everyone is speaking of...)

UPDATE! two days ago, the first full "episode" of you don't know jack premiered, featuring classic YDKJ-style questions, a dis-or-dat round, and the epic jack attack! look for the entry from monday, march 5th to play it.