You Are Still a Box 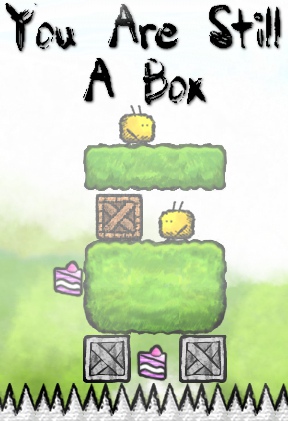 Months after discovering You Are a Box, Games Northwest is happy to report that You Are Still a Box. And you've got some work to do. The remarkably brain cell deficient Nabbles need to get to the exit, but since their only ability is walking and turning around when they hit a wall, you've got to help them avoid stepping into traps. As a box, you're just the moderately-animate object to do it, though you're going to need a little help along the way.

On their own, boxes in this game are basically good for two things: sliding left and right, and providing a stable platform. Most of your time will be spent catching the Lemming-like critters on your head, then moving to stay beneath them while they traverse spike-laden territory. A few power-ups make things a little tricker, such as the balloon that gives you limited flight, and the arrow that allows you a single jump. Once you puzzle out how to get the Nabbles to the goal, you'll find yourself distracted by slices of cake. Three appear in each stage, and if you're a perfectionist, you'll want to grab them all.

Later stages in You Are Still a Box get pretty tricky, emphasizing good reflexes and perfect timing above the light puzzle aspects of the game. Both the mobile versions and the browser release are the same game, providing around 20 levels of Nabble-saving entertainment. You've certainly got your work cut out for you!

Play You Are Still a Box

You Are Still a Box
(iPhone, iPad, iPod Touch)

You Are Still a Box
(Android)