It's time for some more fun! Over the weekend, Berzerk Studios unleashed Berzerk Ball for iPhone, iPad, and iPod Touch. The game is a follow-up to the browser game Homerun in Berzerk Land released earlier this year. If you're not familiar with it, think Nanaca Crash but ten times as hip and with upgrades galore. If you are familiar with it, you've already started drooling! 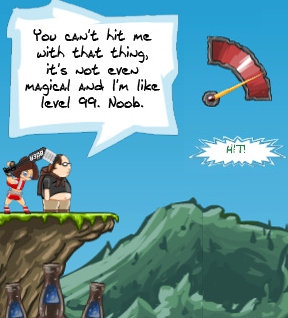 Apart from actually getting to play the game, there's another fun bit to announce. We've teamed up with Berzerk Studios to offer you a chance to be a part of Berzerk Ball! Not only that, you can win one of four iTunes Gift Cards, each worth $25! You know the geek you smack around who makes snarky comments as he walks back for more punishment? Well, you can be one of those comments. All you have to do is sign in below with your Casual Gameplay account and leave a comment along the lines of something you might see in the game. An example: "Noob shot. Didn't get that far lolz." Be funny. Be unique. Be awesome.

All entries will be judged by our staff and the Berzerk Studios team. All entries must be received by Monday, December 27 at 11:59 PM (GMT-5). Multiple entries are allowed. Keep in mind that this is an all-ages site, so make your captions profanity-free (but include all the internet attitude you like!).

The winners have been chosen! The winners are, in no particular order: Berzerk Studios will be in touch with you with your prizes. Thanks to everyone for participating!

Plus, some extra notes from our legal department:


We'll be getting a hold of the winners via e-mail. Now, warm up your funny bone and get to work!

"Still not as good as mine."

"I was AFK and this is what I get. Oh well, it was a nice workout walking here."

"OMG this game is too easy! Way to cater to teh casuals!!"

"Try that again when I'm not recovering stamina, rat breath!"

"Oh yeah? Well my guild hall is bigger than yours."

"I have lots of leet moves you haven't even seen yet."

"You realize you just gave me consent."

"I could toss a dwarf further than that!"

And clear on the other end of the spectrum...

...I need to bleach my brain after that last one...

"You're worse than Steve Jobs"

"Oh, I'm sorry, were you swinging at me? I was enjoying the slight breeze."

"NOOB! Why don't you go back to your Dungeons and Dragons cards before you hurt yourself?"

"I pwned this game"

"Why are you still playing this? Leave it to someone who doesn't suck!"

"Wheeee! - or at least I'd say that if you'd actually sent me flying"

"Lol - I just realized you were trying to send me flying"

"I can get the same score - in my sleep"

"My grandmother can do better than that!"

"I love the sensation of free falling - but that wasn't it"

Unless I'm mistaken you barely hit me the length OR breadth of Azeroth; noob.

I've been hit harder by moe girls at Comic-Con.

You somehow managed to not break any of the limited-edition models in my pockets.

"Lolz!Even turtles hit better than you!"

"Oh my head!I feel like NOTHING HAPPENED AT ALL!"

"Who taught you to hit?The kids from the kindergarten?"

"The damage was insignificant compared to the bites of my ants in the ant farm!"

"Son, I am disappoint."
"Wakawakashii. Inpo! Dekai guzu!!"
"You hit like a girl. At least, I assume that's what the touch of a girl is like."
"It's Super Effective!"
"Are you sure you have the proper elemental alignment?"
"How do I Barrel Roll!?"
"That was lamer than Krillin!"
"Hit me again, I'm gonna close my eyes and pretend you're Tsunade."

"Your dexterity must be negative for a shot like that."

"Thanks for popping that zit."
"I read about this on alt.fan.s&m."
"That hurteted!"
"I find your lack of aim disturbing."
"Your Cosplay outfit is completely wrong."

2nd dialogue "...is what I would say if you didn't completely suck"

"Congratulations, you have completed the worst player ever achievement!"

"I thought hard was implied when I said hit me"

1st dialogue "now for my evil revenge"
2nd dialogue "you can't hit me with that thing"
3rd dialogue "how did you know i was going to attack you? "
4th dialogue "i saw you from the reflection of my glasses"
5th dialogue "arrrrrrrrrh"
its a hit.....
6th dialogue "ha ha ha once again you failed, you think i'd just let you get me like that? well you see those three projectors at the bottom of the clift?"
7th dialogue "yeah"
8th dialogue " they're making a hologram of me, 3 projectors to make it more... you know 3D"
9th "oh i missed you this time but i'll get you next time"

Waiting for shot:
"So, going for the sneak backstab? Lame! That won't even get past my armour of ..wait. What's that you're holding?"

"A brick has better aerodynamics than me. Play with the brick. Nice brick."

"My Level 30 Paladin can hit harder than you"

"Where did you learn to hit, Wii Sports?"

i'm in ur sequel, mocking ur hitz.

Don't quit now, you're almost as powerful as my kid sister.

That hurt less than my Second Life divorce.

You didn't even crush my Cheezy Curlz.

Mountain Dew causes more damage to my body than that hit did.

Wow, this must be a boss level.

At least I have chicken.

Hey, this is a no PvP zone!

Can we hurry this up? I've got a LAN party to get to.

'Somehow, you managed to achieve a negative score.'

'Even after YFYIAR "correcting me", I can hit better than you.'

The force is not strong with this one.

That was weaker than the writing in Caprica.

Never bring a tricorder to a phaser fight.

You're lucky these lenses are a scratch resistant polymer.

Anybody want a peanut?

When will we get to see the winners of this?

[John received word back from the developers today, he should be adding an update soon! -Jay]

Were winners ever chosen for this? I'm sorry, I don't mean to be that guy; I'm just curious. :)

I just found out and it was a huge surprise...very out of the blue. Thank you for hosting the contest, JIG!

I'm sorry, are you possibly trying to attack me? I'm pretty sure my "I take death wishes" flag wasn't on.