Take me out to the You Are Games! Take me out to the crowd! Bring me some captions and quirky punchlines, your quip could be featured in an upcoming comic! For it's loot, loot loot you could win if your caption tickles our funny bone, so it's one, two, three strikes you're out, 'cause that frooooooog's oooooooon fiiiiiiiiiire!

(It's best if you do not attempt to sing the above.) 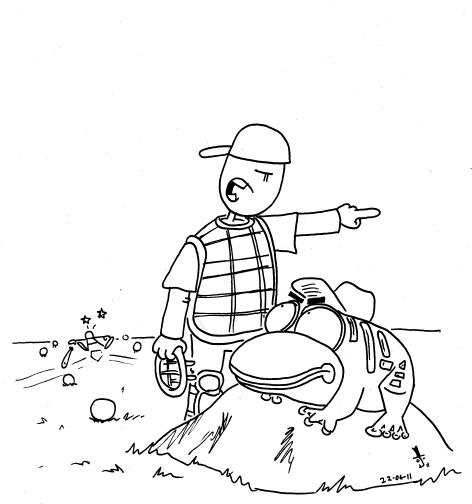 We're back for another Babylon Sticks caption contest, brought to you in part by our good friend and colleague, James Francis. The last part, the caption, comes from you! If you think you've got a punchline that will knock us out of the park with laughter, share it with us. Post your caption ideas below using your Casual Gameplay account, and if your caption gets used, it's a grand slam for you! You'll be credited in next week's comic, and you'll also get a nice prize for your troubles.

So you don't get called out at the plate, here are a few more rules to keep in mind: Multiple entries are allowed. Please keep your captions obscenity-free and safe for all ages. Remember that we usually prefer captions with a gaming theme in them. Plus, we've also got these familiar legal bits:

I don't care if he DID have a fly on his shoulder!

How many time do I have to tell you, the balls are not birds and the batter's not a pig.

Or,
That's it Frogger, it's back across the street for you.

"Hit the showers, Zuma, 'til you learn to control that 'spit' ball"!

Where has this gone? (No it's not a caption)
By the way that's the frog from Zuma who spat marbles at the batter.

Is that frog from something?

That's it! I'm installing a cannon in the pitcher's mound.

When I say "walk 'em," they need to be able to actually walk.

That's it. You're out till that cough clears up.

Go sit on the bench and tell that catapult he's up next.

"Hey, buddy, why don't you go join your pal across the highway there, some of us are actually -trying- to win that million dollars!"

Is that what they call Montezuma's Revenge?

I don't care if you have earned 'super cannon', you can't use it on the field!

You do NOT eat the fly balls!!

I will not allow tongue-in-cheek pitches! Now go kiss my princess and come back ready to play!

"You have the wrong game, the Frog court is 2 doors down"

"And I'm saying if you keep hypnotizing all the players, this game is never going to -- ALL GLORY TO THE HYPNOTOAD!"

Hmmm...laughing at the Frogger references because that's where my brain went. Never even heard of Zuma!

This is baseball, there is no score bonus for getting "Ace Time!"

"That's it! You're outta here! Why don't you go join a dodge ball team or somethin'!"

Alright rookie, the coach is benching you. He's bringing in the bird launcher.

"Look, I don't care if you have to take two jobs. This is not some volcanic island. This is baseball!"

"I don't care what kind of bonuses you thought he dropped! That was absolutely uncalled for!"

I don't care what league you came from, eating the players are simply not in the rule book!

YOU'VE struck HIM three times, you're out!

"Ok, That's It! Get off this field right now! Go find some flies across the street or something."

"Ok, That's It! Get off this field right now! Go find some flies across the street or something."

I don't care if the ball was the same color as his uniform, you still don't get points for that!

Sorry, sir, but you're at the wrong URL. This is Virtual Baseball, not Zuma.

"Now spit him out and get back there!"

Never mind the french horn in my right hand, GET THE HELL OUT OF HERE

"We told you we only use small white balls here!"

"You are out!, fireballs and rapid-fire are prohibited"

The Zuma 3 tryouts are on that field!

No Zuma, you dont get any bonus points for shooting through a gap and hitting the pitcher...

I don't care how many points it was worth at your old job, you just gave them another run! Hit the showers!

"What do you mean, you were trying to solve LITS and ran into him? Get out!"

That was terrible, I am seriously considering sending you to Beavis and Butt-head's Team.

"Get your own game!"

"We needed a pitcher, not a spitter!"

"We asked for Easy mode, not Challenge mode!"

"Come back when you found yourself an accuracy power-up!"

"Come back after you've found an accuracy power-up!"

Eeep I think I'm a little late for the competition but I just cant believe no one has suggested.....

"The Budweiser commercial is that way."

"Would you please hop back across the street and stop the Battle Toads? They are ruining our game!"